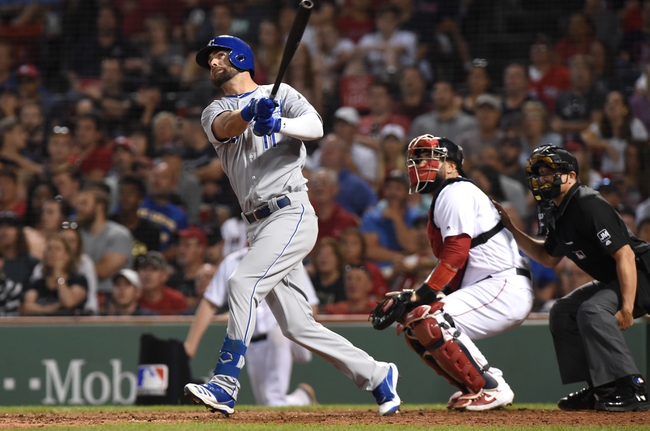 TV: FS-Kansas City, NESN Stream the MLB Game of the Day all season on ESPN+. Sign up now!

The Kansas City Royals and the Boston Red Sox meet in game two of their three game set in MLB action from Fenway Park on Tuesday.

The Kansas City Royals will be out to snap what is now a seven game losing streak after opening the series with a 7-5 loss on Monday. Bubba Starling had a home run and three RBIs while Cheslor Cuthbert and Melbrys Viloria each had a solo home run as well in the victory. Whit Merrifield and Hunter Dozier each went 2 for 4 with a double while Nicky Lopez added a base hit as well in the loss to finish off KC’s offense. Mike Montgomery took the loss, falling to 0-3 on the year after giving up four runs, two earned, on seven hits while striking out seven over five innings of work. Jakob Junis will start game two and is 6-10 with a 5.03 ERA and 126 strikeouts this season. In his career, Junis is 0-1 with a 5.91 ERA and 10 strikeouts against Boston.

The Boston Red Sox will look to build some momentum after snapping their losing streak with a victory in Monday’s opener. Andrew Benintendi and Sam Travis each had two RBIs with Benintendi going 2 for 4 with a double while Travis belted a home run. Rafael Davers had a solo home run while Xander Bogaerts added an RBI as well in the winning effort. Michael Chavis went 2 for 3 while Jackie Bradley Jr. and Sandy Leon each had a base hit as well in the victory. Rick Porcello got the win to improve to 10-8 on the year after giving up one run on four hits while striking out five over six innings of work. Brandon Workman closed out the 9th for his 6th save of the year. Andrew Cashner will start game two and is 10-6 with a 4.44 ERA and 82 strikeouts this season. In his career, Cashner is 0-3 with a 3.29 ERA and 15 strikeouts against Kansas City.

I’m tempted to take Boston on the RL as maybe that win was what the Red Sox needed to start turning things around, and it wouldn’t surprise me to see that happen considering that Junis has allowed four or more runs in four of his last seven starts and has allowed ten runs in 13 innings in his last two starts. However, Cashner hasn’t been very good since joining the Red Sox, giving up 18 earned runs in 23.1 innings since the trade for a 6.94 ERA. I just think this is another game where the offense should shine through, so I’ll side with the over in this one for a second straight game.