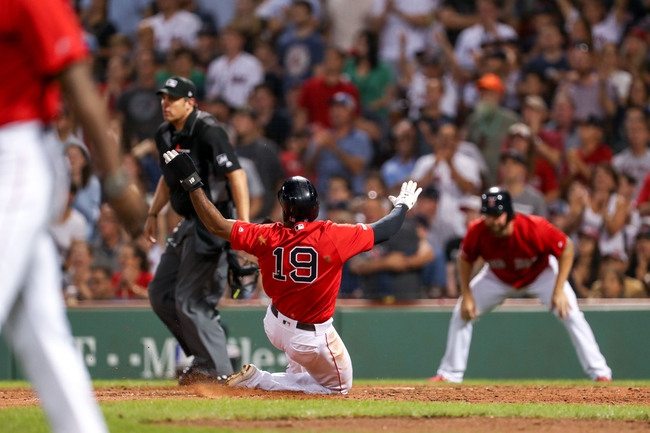 TV: FS-West, NESN Stream the MLB Game of the Day all season on ESPN+. Sign up now!

The Los Angeles Angels and the Boston Red Sox meet in game three of a four game set in MLB action from Fenway Park on Saturday.

The Los Angeles Angels will be out to get a win on the board and snap an eight game losing streak following a 16-4 beatdown at the hands of Boston in game two on Friday. Albert Pujols had a home run and three RBIs while Brian Goodwin added an RBI as well to finish off the Angels’ offense as a team in the losing effort. Mike Trout and Justin Upton each had a base hit as the Halos had just three hits as a team in the defeat. Jaime Barria took the loss, falling to 4-6 on the year after giving up five runs on six hits while striking out three over five innings of work. Andrew Heaney will start game three and is 1-3 with a 5.09 ERA and 54 strikeouts this season. In his career, Heaney is 1-0 with a 6.97 ERA and 8 strikeouts against Boston.

The Boston Red Sox will look to win the series and push for a four game sweep on Sunday after taking the first two games of the set with Friday’s victory. J.D. Martinez went 4 for 5 with a pair of home runs and a pair of doubles along with four RBIs while Rafael Devers and Mitch Moreland each went 2 for 5 with a home run and three RBIs with Moreland adding a double. Mookie Betts had a home run, a double and two RBIs while Christian Vazquez and Sam Travis each had an RBI as well in the victory. Xander Bogaerts added a double while Jackie Bradley Jr. added a base hit as well in the winning effort. Marcus Walden picked up the win in relief to improve his record to 6-1 on the year. Rick Porcello will start game three and is 10-8 with a 5.54 ERA and 104 strikeouts this season. In his career, Porcello is 7-7 with a 5.56 ERA and 80 strikeouts against the Angels.

Porcello has a bloated ERA this season, with an ERA over five at home and over six on the road this season. However, even with his struggles, Porcello keeps finding ways to win, earning the W in five of his last six starts. Heaney has had his ups and downs since joining the rotation mid-season, and is coming off the IL with shoulder inflammation after having last pitched three weeks ago. I just don’t think that Heaney is going to be the guy to stop the bleeding for the Angels, so I’ll lay the reasonable price with the Red Sox here.