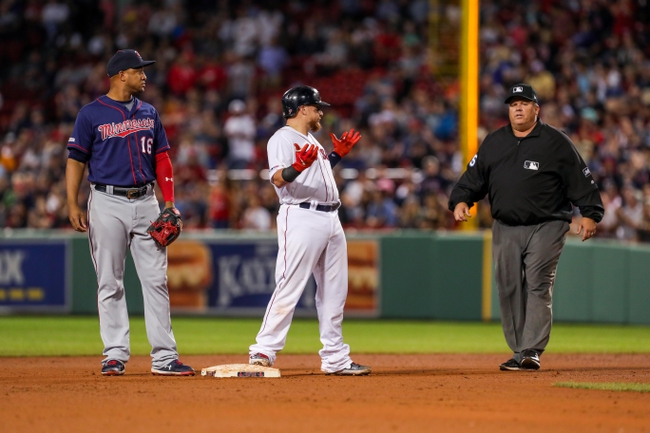 TV: FSN, NESN Stream the MLB Game of the Day all season on ESPN+. Sign up now!

The Minnesota Twins look to stay hot after winning nine of their last 11 games. The Twins have scored 12 runs in their last three games and four or more runs in 10 of their last 12 games. The Minnesota Twins have won eight of their last nine games when scoring four or more runs. Jorge Polanco leads the Twins with 168 hits and 69 RBI while Eddie Rosario and Max Kepler have combined for 263 hits and 184 RBI. Martin Perez gets the ball, and he is 9-6 with a 4.89 ERA and 120 strikeouts this season. Perez is 2-2 with a 5.68 ERA and 18 strikeouts in his career against the Red Sox.

The Boston Red Sox look for a win after winning seven of their last 10 games. The Red Sox have scored 15 runs in their last three games and four or more runs in their last seven games. The Boston Red Sox have won 12 of their last 14 games when scoring four or more runs. Rafael Devers leads the Red Sox with 177 hits and 107 RBI while Xander Bogaerts and Mookie Betts have combined for 323 hits and 178 RBI. Nathan Eovaldi gets the ball, and he is 1-0 with a 6.23 ERA and 46 strikeouts this season. Eovaldi is 3-3 with a 5.50 ERA and 25 strikeouts in his career against the Twins.

Perez has allowed 44 hits and 23 earned runs in his last 30.2 innings, and he has a 5.14 ERA and .278 allowed batting average on the road. Eovaldi has allowed 17 hits and 11 runs in his last 18.2 innings, but he's coming off a four-inning performance in his last game, his most since April 17. Eovaldi obviously isn't the same pitcher he was last year, but it is promising to see him get an expanded workload as of late, and the stuff is still there. Perez just isn't good on the road and has really had issues overall since June. I'm going to back the Red Sox in this spot.