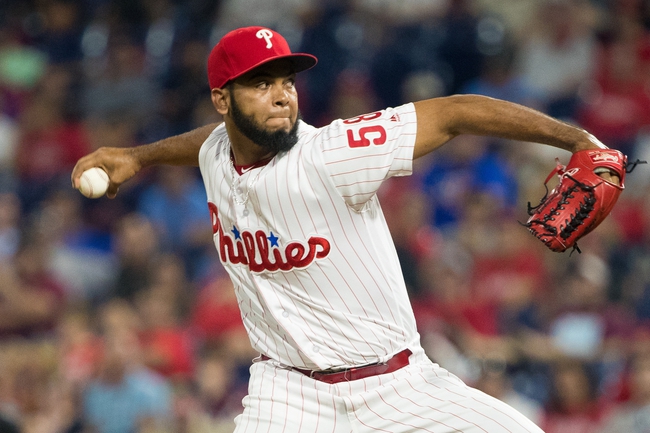 The Philadelphia Phillies and the Boston Red Sox meet in game one of a mini two game interleague set in MLB action from Fenway Park on Tuesday night.

The Philadelphia Phillies will look to bounce back after losing the rubber match of their series with San Diego following a 3-2 loss in Sunday’s series finale. Jean Segura went 2 for 4 with a pair of doubles and two RBIs while Bryce Harper and Cesar Hernandez each added a base hit to finish off Philadelphia’s offense as the Phillies had just four hits as a team in the losing effort with the rest of the team batting 0 for 23 with 7 strikeouts. Jason Vargas allowed two runs on six hits while striking out four over 5.2 innings of work, not factoring in the decision. Jared Hughes took the loss, falling to 3-5 on the year in relief. Aaron Nola will start game one and is 11-3 with a 3.56 ERA and 173 strikeouts this season. This will be Nola’s second career start against Boston.

The Boston Red Sox will look to extend their winning streak which currently sits at five games after sweeping Baltimore, following a 13-7 win in Sunday’s finale. Rafael Devers went 4 for 5 with a home run, two doubles and four RBIs. Xander Bogaerts and J.D. Martinez each had two RBIs while Sam Travis added a solo home run. Christian Vazquez and Mookie Betts each had a double and an RBI while Mitch Moreland had three hits and an RBI. Nathan Eovaldi allowed five runs on three hits in just two innings in the start, not factoring in the decision. Marcus Walden got the win in relief to improve to 8-2 on the year. Brian Johnson will start game one and is 1-1 with a 6.45 ERA and 17 strikeouts this season. This will be Johnson’s second career start against Philadelphia.

Getting Boston at plus money at home is tempting, especially considering that the Red Sox need to win games to remain in the wild card hunt. However, I just don’t think Johnson is back to being himself, as he’s allowed three runs in three innings or less in two of his three appearances since coming off of the DL. It also doesn’t help that Boston’s struggled against teams with winning records lately. Nola’s had his issues on the road, but his ERA in three starts this month is currently the lowest in any month all season, and getting the Phillies who also need wins with their staff ace on the mound is too good to pass on. Give me the Phillies to draw first blood here.