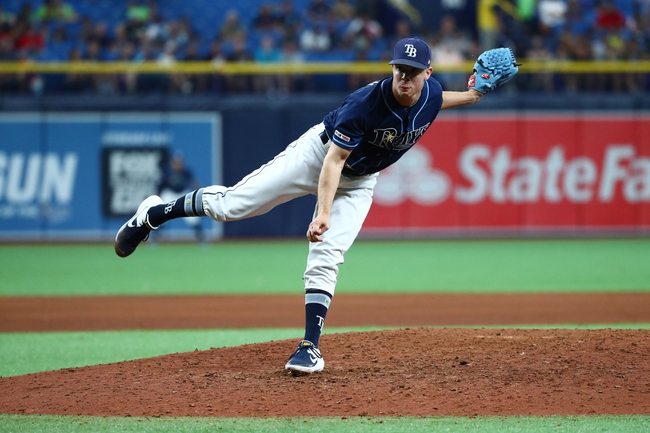 The Tampa Bay Rays and the Boston Red Sox meet in game one of a three game AL East division set in MLB action from Fenway Park on Tuesday.

The Tampa Bay Rays will look to build some steam after rallying to beat Toronto in the rubber match of their series on Sunday, taking game three by a final score of 10-9. Ji-Man Choi, Travis D’Arnaud and Guillermo Heredia each had two RBIs with Choi and Heredia each hitting a home run while D’Arnaud added a double. Willy Adames had a solo home run while Nate Lowe, Joey Wendle and Matt Duffy each had an RBI with Lowe chipping in a double. Tommy Pham went 2 for 4 while Austin Meadows added a base hit as well in the victory. Yonny Chirinos allowed seven runs on eight hits while walking three and striking out four over four innings, not factoring in the decision. Chaz Roe got the win to improve to 1-3 on the year while Diego Castillo locked up his 8th save of the season. Charlie Morton will start game one and is 12-3 with a 2.60 ERA and 163 strikeouts this season. In his career, Morton is 5-1 with a 3.86 ERA and 45 strikeouts against Boston.

The Boston Red Sox will look to rebound after failing to complete the sweep of the New York Yankees with a 9-6 loss in the finale of their four game set on Sunday night. Andrew Benintendi went 3 for 5 with a home run and four RBIs while Mookie Betts and J.D. Martinez each had an RBI to cap off Boston’s scoring as a team in the loss. Zander Bogaerts went 3 for 5 with a double while Rafael Devers added a two-bagger of his own. Mitch Moreland, Jackie Bradley Jr. and Christian Vazquez each had a base hit as well in the losing effort. Chris Sale took the loss, falling to 5-10 on the year after allowing six runs on five hits while striking out seven over 5.1 innings of work. David Price will start game one and is 7-4 with a 3.66 ERA and 114 strikeouts this season. In his career, Price is 6-6 with a 3.23 ERA and 126 strikeouts against Tampa Bay.

Boston should probably be favored here based on how they’ve stepped up their play lately, especially after nearly completing the sweep of the division-leading Yankees. However, Price hasn’t had a ton of luck against the Rays this season, dropping two of his three starts while allowed 13 runs across his last three starts in 15 innings, including three earned in a losing effort to the Rays last time up. Morton has arguably been Tampa’s best and most consistent starter and threw six shutout innings at Fenway earlier this season. The Rays have also had Boston’s number at Fenway Park this season, so I’ll take a shot with the Rays and the plus money in this one.