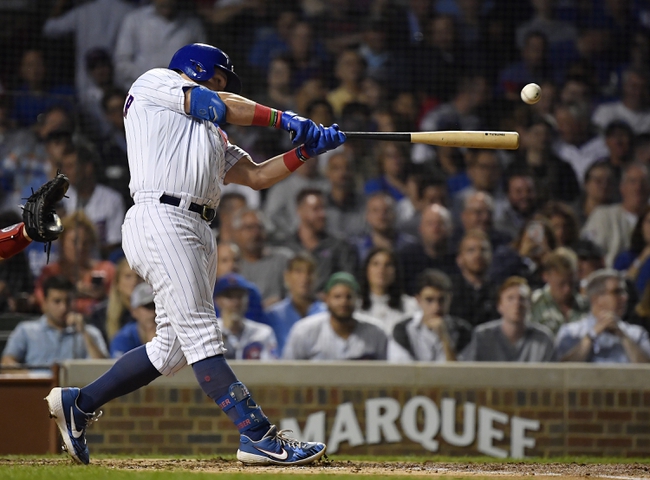 TV: FS-Ohio, WGN Stream the MLB Game of the Day all season on ESPN+. Sign up now!

The Cincinnati Reds and the Chicago cubs meet in the rubber match of their three game NL Central set in MLB action from Wrigley Field on Wednesday night.

The Cincinnati Reds will look to play spoiler and win the series after taking game two on Tuesday by a final score of 4-2. Aristides Aquino had a home run and two RBIs while Joey Votto had a double and an RBI and Eugenio Suarez went 2 for 4 with an RBI to cap off Cincinnati’s scoring as a team in the win. Josh VanMeter, Tucker Barnhart and Sonny Gray each had a base hit as well in the winning effort for the Reds. Sonny Gray got the win to improve to 11-7 on the year after allowing two runs on four hits while walking three and striking out nine over 6.2 innings of work. Raisel Iglesias picked up his 32nd save of the year by closing out the 9th. Tyler Mahle will start the finale and is 2-11 with a 5.11 ERA and 120 strikeouts this season. In his career, Mahle is 2-1 with a 4.18 ERA and 22 strikeouts against the Cubs.

The Chicago Cubs will look to bounce back after a frustrating loss in game two on Tuesday. Kyle Schwarber went 3 for 4 with a triple, a double and both of Chicago’s RBIs while Ben Zobrist and Nico Hoerner each had a base hit as the Cubbies cranked out just five hits as a team in the losing effort. Yu Darvish took the loss, falling to 6-7 on the year after allowing four runs on six hits while striking out 12 over seven innings of work. Jon Lester will start game three and is 13-10 with a 4.59 ERA and 156 strikeouts this season. In his career, Lester is 7-2 with a 4.00 ERA and 101 strikeouts against Cincinnati.

If a total was released at the time of posting, I probably would’ve taken the over as Lester’s allowed 15 runs, 12 earned, across 10.1 innings in his last two starts, while Mahle’s given up nine runs in his last 7.2 innings of work in his last two starts. However, since I’m being forced to pick a side, while the plus money is tempting, Mahle hasn’t been very good, and the Reds rarely win with him on the mound. Lester’s been bumped around lately, but he’s more experienced in big game situations like these, along with the fact that Chicago’s been very good at home this season and the fact that the Cubs have lost their wiggle room, now tied with Milwaukee for the second wild card spot. I think the Cubs realize to severity of this situation and step up to the plate, so I’ll lay the juice with Chicago in this one.