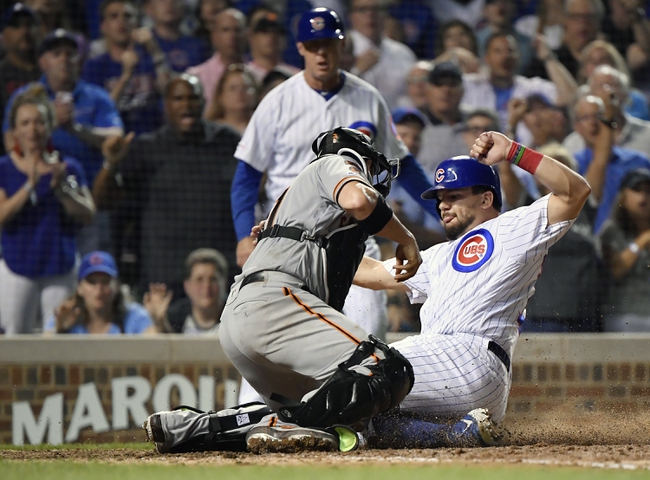 The San Francisco Giants and the Chicago Cubs meet in the finale of a three game set in MLB action from Wrigley Field on Thursday afternoon.

The San Francisco Giants will look to salvage a win and avoid the sweep after dropping game two on Wednesday by a final score of 12-11. Stephen Vogt went 2 for 5 with a home run and three RBIs while Mike Yastrzemski, Evan Longoria and Austin Slater each had two RBIs with Yastrzemski going 3 for 5 with a home run and a double, Longoria going 2 for 4 with a home run and Slater adding a pinch-hit double. Kevin Pillar had a solo home run while Brandon Belt added an RBI as well to finish off San Fran’s scoring as a team in the loss. Alex Dickerson and Brandon Crawford each had two hits with a double to cap off the Giants’ offense as a team in the losing effort. Dereck Rodriguez allowed six runs on six hits over four innings of work, not factoring in the decision. Reyes Moronta took the loss, falling to 3-7 on the year as a result. Jeff Samardzija will start game three and is 9-9 with a 3.54 ERA and 119 strikeouts this season. In his career, Samardzija is 0-2 with a 6.35 ERA and 16 strikeouts against the Cubs.

The Chicago Cubs will look to complete the sweep after taking the first two games of the set following Wednesday’s victory. Nick Castellanos and Kyle Schwarber each had a home run and three RBIs with Castellanos going 4 for 5 at the dish. Kris Bryant had a home run and two RBIs while Anthony Rizzo added a double and an RBI of his own. Javier Baez, Victor Caratini and Yu Darvish each had an RBI to finish off the Cubs’ scoring as a team in the win while Jason Heyward and Tony Kemp each added a base knock to finish off Chicago’s offense. Darvish allowed seven runs, six earned, on seven hits while striking out eight over 5.1 innings of work, not factoring in the decision. Brandon Kintzler got the win to improve to 3-2 on the year while Craig Kimbrel closed out the 9th for his 11th save of the year. Kyle Hendricks will start game three and is 8-9 with a 3.37 ERA and 115 strikeouts this season. In his career, Hendricks is 3-2 with a 2.47 ERA and 37 strikeouts against San Francisco.

I’m tempted to take a stab at the Giants and the plus money given how well Samardzija has pitched lately, both overall and on the road, allowing two runs or less in each of his last five road starts and two runs or less in eight of his last nine starts overall. On the other hand, Hendricks has pitched a lot better than his record would indicate, and he’s posted a 1.98 ERA in 10 home starts spanning 68.1 innings this season. I think a pitchers’ duel could be on the cards here, so I’m going to side with the under in the series finale.