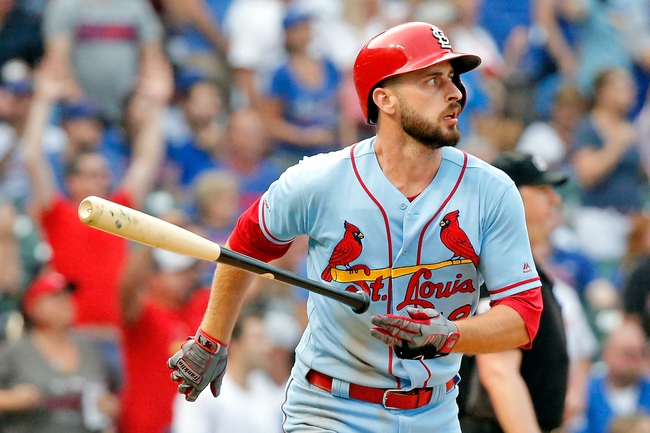 The St. Louis Cardinals and the Chicago Cubs meet in the finale of their four game set in MLB action from Wrigley Field on Sunday.

The St. Louis Cardinals will look to complete the four game sweep of the Cubs after rallying for a 9-8 win in Saturday’s game three. Dexter Fowler, Paul Goldschmidt and Marcell Ozuna each had two RBIs with Ozuna belting a home run. Yadier Molina and Paul DeJong each had a solo home run while Rangel Revelo added an RBI to finish off St. Louis’ scoring as a team in the win. Tommy Edman went 2 for 4 with a triple and Matt Carpenter went 2 for 3 with a double while Dakota Hudson added a base hit as well to finish off the Cardinals’ offense as a team in the win. Hudson gave up three runs on three hits while walking four over three innings of work, not factoring in the decision. John Gant got the win to improve to 11-1 on the year while Carlos Martinez picked up his 23rd save of the season. Miles Mikolas will start the finale and is 9-14 with a 4.29 ERA and 140 strikeouts this season. In his career, Mikolas is 3-2 with a 1.64 ERA and 29 strikeouts against the Cubs.

The Chicago Cubs will look to salvage a key win and avoid the sweep after coming up short in game three on Saturday. Tony Kemp and Ian Happ each had a pinch-hit home run and two RBIs while Nico Hoerner added a solo home run. Ben Zobrist had a double and an RBI while Victor Caratini and Jason Heyward each had an RBI as well to finish off Chicago’s scoring as a team in defeat. Anthony Rizzo, Nick Castellanos and Kyle Schwarber each had a double with Rizzo going 3 for 5 and Schwarber adding a pair of hits to finish off Chicago’s offense in the loss. Jose Quintana allowed five runs on five hits while striking out four over 3.1 innings of work, not factoring in the decision. Craig Kimbrel took the loss in relief to fall to 0-4 on the year. Yu Darvish will start game four and is 6-7 with a 4.02 ERA and 217 strikeouts this season. In his career, Darvish is 0-1 with a 4.50 ERA and 19 strikeouts against St. Louis.

I understand the Cubs being favored at home because they’ve been a solid home team all season and Mikolas has an ERA just shy of six on the road this season. However, Darvish has an ERA over five at home in his own right, and while it’s hard to sweep a four game set, especially within the division, but the Cards just keep finding ways to win and hold a ton of value on Sunday so I’ll take St. Louis and the plus money on Sunday.