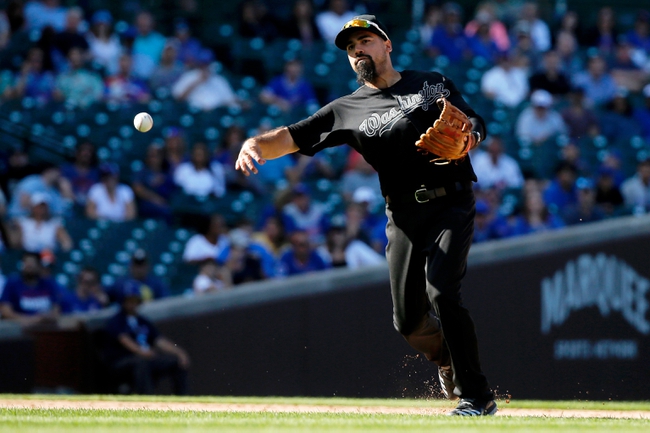 The Washington Nationals and the Chicago Cubs meet in game two of their three game set in MLB action from Wrigley Field on Saturday.

The Washington Nationals will look to keep the momentum rolling along after opening the series with a 9-3 win in game one on Friday. Victor Robles went 2 for 4 with a double and two RBIs while Adam Eaton and Juan Soto each belted a solo home run with Soto going 3 for 4 at the dish. Howie Kendrick went 2 for 5 with a double and an RBI while Kurt Suzuki, Trea Turner and Anibial Sanchez each had RBIs as well in the victory. Brian Dozier and Anthony Rendon each had base hits as well to cap off Washington’s offense as a team in the winning effort. Sanchez got the win to improve to 8-6 on the year after allowing two runs, one earned, on one hit while striking out six over 8.1 innings of work. Erick Fedde will start game two and is 4-2 with a 4.31 ERA and 38 strikeouts this season. This will be Fedde’s second career start against the Cubs.

The Chicago Cubs will look to bounce back after having their five game winning streak snapped in Friday’s loss. Nick Castellanos went 2 for 4 with a double and an RBI while Anthony Rizzo added an RBI and a base hit of his own as Chicago had just three hits as a team in the losing effort with the rest of the team batting 0 for 23 with 5 strikeouts. Jon Lester took the loss, falling to 10-9 on the year after allowing six runs on nine hits over 4.1 innings of work. Jose Quintana will start game two and is 11-7 with a 3.91 ERA and 131 strikeouts this season. This will be Quintana’s first career start against Washington.

The Cubs being favored at home makes sense because Chicago’s been mowing down teams left and right at home and Quintana has been dealing lately, allowing just four earned runs across his last four starts totalling 26 innings of work. Chicago’s also won eight of Quintana’s last nine starts overall with Quintana going 7-0 over that stretch. However, Washington is back to playing some solid baseball and are on a tear of their own lately, and while Fedde hasn’t been the most consistent pitcher in the world, he has much better numbers on the road this season with a 2.17 ERA in five starts compared to an ERA just under six at home this season. I wouldn’t be surprised if the Cubs rebounded with a win here, but the value with Washington and plus money is too good to pass on.