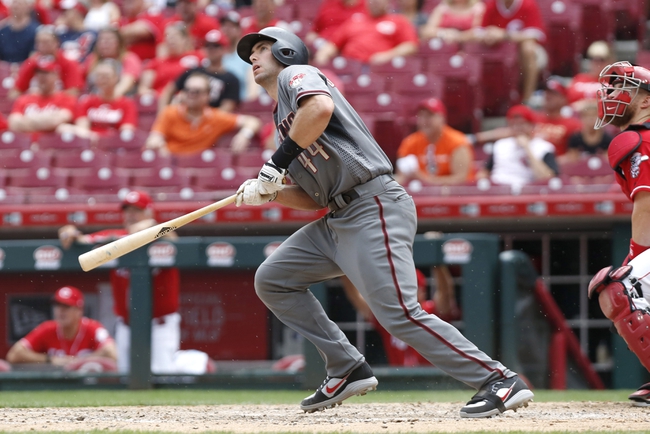 TV: FS-Arizona, FS-Ohio Stream the MLB Game of the Day all season on ESPN+. Sign up now!

The Arizona Diamondbacks and the Cincinnati Reds meet in game one of a three game set in MLB action from Great American Ballpark on Friday.

The Arizona Diamondbacks will look to keep their momentum going after winning three straight and nine of their last 10 games following a 4-1 win over San Diego last time out, completing the sweep of the Padres in the process. Ketel Marte went 3 for 4 with a home run, accounting for all four Arizona RBIs in the win. Jarrod Dyson, Eduardo Escobar, Christian Walker, Wilmer Flores, Nick Ahmed and Alex Avila each had a base hit as well to finish off Arizona’s offense in the win. Zac Gallen got the win to improve to 3-4 on the year after tossing seven shutout innings, allowing just one hit while striking out nine on the way to the victory. Archie Bradley closed out the 9th for his 12th save of the year. Robbie Ray will start game one and is 12-7 with a 3.97 ERA and 199 strikeouts this season. In his career, Ray is 1-2 with a 4.09 ERA and 28 strikeouts against Cincinnati.

The Cincinnati Reds will look to finish the stretch strong after earning a split with the Phillies, following a 4-3 win in extra innings on Thursday. Jose Iglesias had a home run and two RBIs while Eugenio Suarez and Phillip Ervin each had a solo home run to round out Cincinnati’s scoring with Suarez going 3 for 5 at the dish. Alex Blandino went 2 for 4 with a double while Josh VanMeter added a two-bagger of his own and Curt Casali added a base hit to finish off the Reds’ offense in the victory. Sonny Gray allowed one run on four hits while striking out seven over six innings of work, not factoring in the decision. Matt Bowman got the win in relief to improve to 2-0 on the year. Tyler Mahle will start game one and is 2-10 with a 4.72 ERA and 111 strikeouts this season. This will be Mahle’s first career start against Arizona.

The plus money with Cincinnati is tempting given that the Reds are at home and just battled to earn a split with Philadelphia who are in the thick of the playoff hunt. However, while the spoiler role is in play, the fact is that Arizona is red hot right now, and still have a shot at a wild card spot if they can get some help down the stretch. It’s crazy how this D-Backs team has gone from one that was written off after trading Zack Greinke to a team in the thick of the playoff race in the final month of the season. I also don’t really trust Mahle as a starter, so I’ll side with Arizona and the reasonable line on the road here.