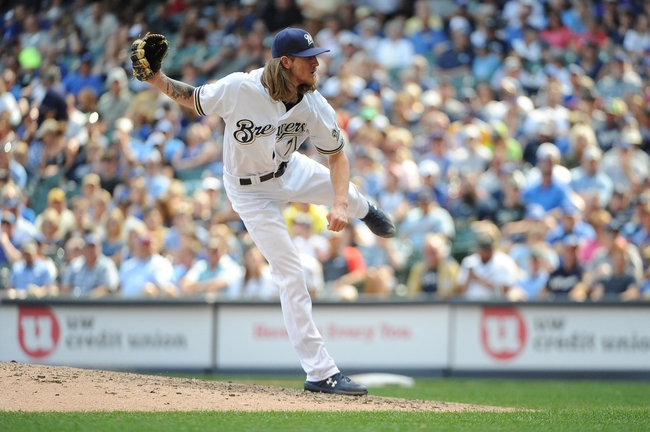 TV: FS-Ohio, FS-Wisconsin Stream the MLB Game of the Day all season on ESPN+. Sign up now!

The Milwaukee Brewers and the Cincinnati Reds meet in game one of a three game NL Central division set in MLB action from Great American Ballpark on Tuesday.

The Milwaukee Brewers will look for a win to narrow down their magic number for the wild card spot after a sweeping the Pirates over the weekend, pushing their winning streak to four with a 4-3 win in the series finale. Eric Thames went 2 for 4 with a pair of home runs and three RBIs while Orlando Arcia had an RBI as well to round out Milwaukee’s scoring as a team in the win. Travis Shaw, David Freitas, Keston Hiura and Yasmani Grandal each had a base hit to finish off Milwaukee’s offense as a team in the victory. Brandon Woodruff threw two scoreless innings in the start before Gio Gonzalez got the win in relief to improve to 3-2 on the year. Josh Hader closed out the 9th for his 35th save of the season. Adrian Houser will start the opener and is 6-7 with a 3.83 ERA and 109 strikeouts this season. This will be Houser’s second career start against Cincinnati.

The Cincinnati Reds will try to play spoiler down the stretch after losing their series with the Mets, dropping Sunday’s series finale by a final score of 6-3. Tucker Barnhart and Kyle Farmer each had a solo home run while Aristides Aquino had an RBI to cap off Cincinnati’s scoring in the defeat. Joey Votto, Eugenio Suarez, Jose Iglesias and Jose Peraza each had a base hit to finish off the Reds’ offense in the losing effort. Trevor Bauer took the L, falling to 2-5 in a Reds uniform after allowing five runs on six hits while striking out eight over seven innings of work. Sonny Gray will start game one and is 11-7 with a 2.80 ERA and 199 strikeouts this season. In his career, Gray is 2-0 with a 1.78 ERA and 41 strikeouts against Milwaukee.

The plus money is tempting with a Brewers club that’s looking to lock up a wild card spot, but the issue is that while Houser has pitched well, the Brewers just don’t win many games with Houser on the bump, losing seven of his last ten starts. Cincinnati’s out of the race, but the Reds are still trying to build positive vibes heading into 2020 and Gray could potentially be the ace or 1A in Cincy’s rotation, and it doesn’t hurt that Gray has lost twice since the beginning of June with the Reds going 13-4 in his last 17 starts while also posting solid numbers against the Brewers this year. I’ll lay the reasonable price with Cincinnati in game one on Tuesday.