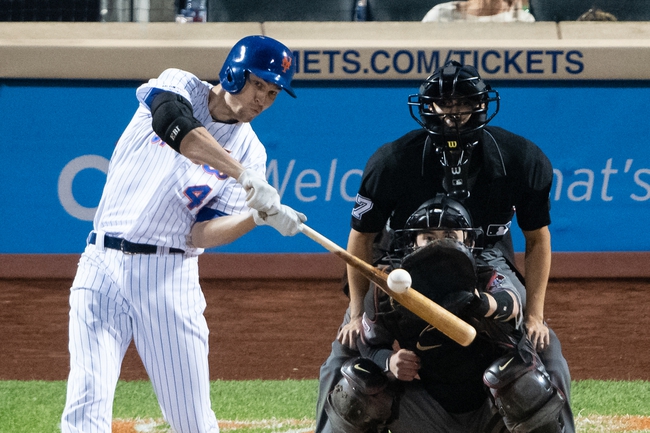 TV: FS-Ohio, SNY Stream the MLB Game of the Day all season on ESPN+. Sign up now!

The New York Mets and the Cincinnati Reds meet in game one of a three game set in MLB action from Great American Ballpark on Friday.

The New York Mets will look to finish strong after winning their series with the Rockies to start the week, taking Wednesday’s rubber match by a final score of 7-4. Pete Alonso had a home run and two RBIs while Jeff McNeil had a solo home run and Brandon Nimmo went 3 for 5 with an RBI. Seth Lugo and Michael Conforto each had an RBI as well while Robinson Cano added a double. J.D. Davis added a base hit to finish off New York’s offense as a team in the win. Noah Syndergaard gave up four runs on ten hits while striking out six over 5.2 innings of work. Seth Lugo picked up the win in relief to improve to 7-4 on the year. Jacob DeGrom will start game one and is 9-8 with a 2.61 ERA and 239 strikeouts this season. In his career, DeGrom is 2-1 with a 1.74 ERA and 40 strikeouts against Cincinnati.

The Cincinnati Reds will look to keep the momentum going down the stretch after winning five of their last seven games following a series win against the Cubs, taking Wednesday’s series finale by a final score of 3-2. Eugenio Suarez went 2 for 5 with a solo home run while Jose Iglesias went 3 for 5 with a double and an RBI. Alex Blandino had an RBI as well to cap off Cincinnati’s scoring as a team in the win. Aristides Aquino, Phillip Ervin, Curt Casali and Michael Lorenzen each had a base hit to finish off the Reds’ offense in victory. Tyler Mahle allowed one run on one hits while striking out three over six innings of work, not factoring in the decision. Amir Garrett got the win to improve to 5-3 on the year while Raisel Iglesias closed things out for his 33rd save of the season. Luis Castillo will start game one and is 15-6 with a 3.22 ERA and 211 strikeouts this season. In his career, Castillo is 1-0 with a 2.92 ERA and 14 strikeouts against the Mets.

I understand New York being favored on the road, because the Mets have been playing better baseball over a longer stretch and have their ace on the mound in DeGrom. However, Castillo is no slouch on the other side and with the way that Cincinnati’s playing lately, I think the Reds are more than capable of taking this one. Instead, I’m going to side with the under. The matchup screams pitchers’ duel, and I wouldn’t be surprised to see a 2-1 or 3-2 type game here.