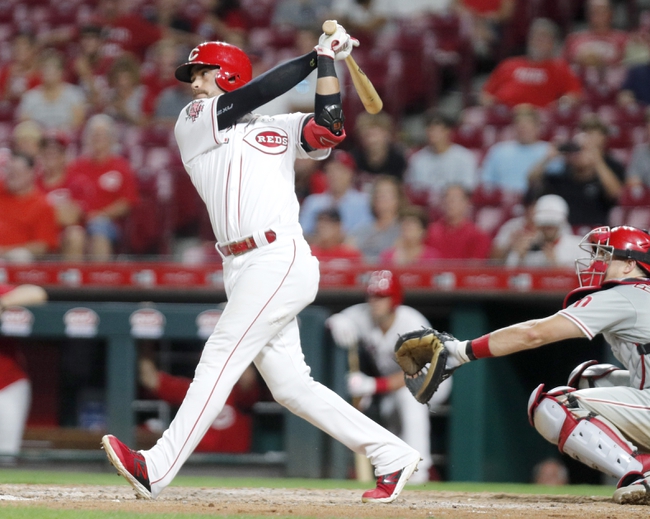 TV: FS-Ohio Stream the MLB Game of the Day all season on ESPN+. Sign up now!

The Philadelphia Phillies and the Cincinnati Reds meet in game three of a four game set in MLB action from Great American Ballpark on Wednesday night.

The Philadelphia Phillies will look to win the set and push for a sweep on Thursday after winning the first two games of the series following a 6-2 win in game two on Tuesday. Scott Kingery had a solo home run while Corey Dickerson, J.T. Realmuto, Bryce Harper, Rhys Hoskins and Cesar Hernandez each had an RBI to finish off Philadelphia’s scoring as a team in the win, with Dickerson and Realmuto each having two hits with a double. Adam Haseley and Jean Segura each added a double to cap off Philadelphia’s offense with Haseley going 2 for 3 with a pair of doubles in the victory. Vince Velasquez allowed one run on four hits while striking out five over three innings of work, not factoring in the decision. Nick Vincent picked up the win in relief to improve to 1-2. Aaron Nola will start game three and is 12-4 with a 3.45 ERA and 194 strikeouts this season. In his career, Nola is 2-1 with a 2.86 ERA and 35 strikeouts against Cincinnati.

The Cincinnati Reds will look to bounce back and get a win on the board after dropping the first two games of the series with Tuesday’s loss. Aristides Aquino and Alex Blandino each had an RBI to make up Cincy’s scoring as a team in the loss while Tucker Barnhart went 2 for 4 and Kyle Farmer added a double. Josh VanMeter and Curt Casali each had a base hit to finish off the Reds’ offense as Cincinnati had just six hits as a team in the losing effort. Lucas Sims allowed on run on three hits in 2.2 innings in the start, not factoring in the decision, while Amir Garrett took the loss, falling to 4-2 on the year. Trevor Bauer will start game three and is 10-12 with a 4.53 ERA and 222 strikeouts this season. In his career, Bauer is 1-0 with a 3.00 ERA and 9 strikeouts against Philadelphia.

Bauer’s actually been a much better pitcher at home than on the road since being traded to the Reds, but the fact is that Bauer’s still lost each of his last four starts and has allowed 26 runs, 24 earned, in that four game stretch spanning just 18.1 innings of work. Nola’s ERA is a full run and a half higher on the road than at home, but he’s the more reliable option on the mound here and the Phillies need to rack up wins wherever they can trying to make up ground on the Cubs in the wild card race. I’ll lay the juice with Philadelphia here.