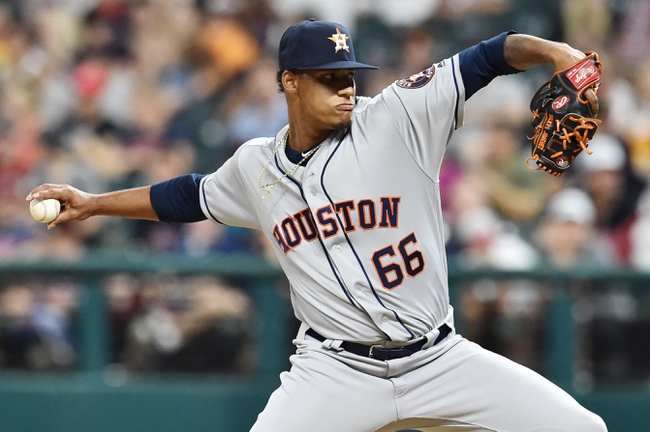 The Houston Astros and the Cleveland Indians meet in the rubber match of their three game set in MLB action from Progressive Field on Thursday.

The Houston Astros will look to bounce back and win the series after dropping game two on Wednesday by a final score of 10-4. Yuli Gurriel had a double and three RBIs while Carlos Correa went 2 for 4 with a solo home run and a double. Josh Reddick, Alex Bregman and Jose Altuve each had a base hit as well to cap off Houston’s offense as a team as the Astros had just six hits as a team in the losing effort. Jose Urquidy took the loss, falling to 1-1 on the year after allowing six runs on eight hits over four innings of work. Gerrit Cole will start the finale and is 12-5 with a 2.94 ERA and 212 strikeouts this season. In his career, Cole is 1-1 with a 3.27 ERA and 23 strikeouts against Cleveland.

The Cleveland Indians will look to keep their offensive momentum going from Wednesday after picking up a huge win in game two. Roberto Perez had a pair of home runs and four RBIs while Jason Kipnis and Carlos Santana each had a home run and three RBIs to round out Cleveland’s scoring as a team in the winning effort. Francisco Lindor went 3 for 5 with a double and Oscar Mercado added a two-bagger of his own while Jordan Luplow went 2 for 4 at the dish to cap off Cleveland’s offense in victory. Zach Plesac got the win to improve to 6-3 on the year after allowing all four runs on six hits while walking and whiffing three apiece over five innings of work. Danny Salazar will make his regular season debut and last pitched in 2017 where he finished the season with a record of 5-6 with a 4.28 ERA and 145 strikeouts across 23 appearances, 19 starts. In his career, Salazar is 1-0 with a 2.25 ERA and 33 strikeouts against Houston.

The heavy plus money with Cleveland can be tempting given that the Indians have been playing well as of late and Wednesday’s victory was proof as to how capable the Cleveland offense can be when it’s producing. However, Houston was a solid World Series contender before the trade deadline, and adding another pitching ace like Zack Greinke makes this lineup even more dangerous. As far as Thursday goes, Cole has been mowing down opposition left and right, giving up one earned run or less in seven of his last eight starts. Salazar has been a serviceable arm for Cleveland, but when making your first major league start in almost two years, I think Houston is one of the last teams that you would want to face and Cole is one of the last pitchers that you want to try to have to match zeroes with. I’ll side with Houston for the series win and to get rid of the heavy juice, I’ll back the Astros on the RL as wins by two or more are a frequent occurrence for Houston with Cole pitching.