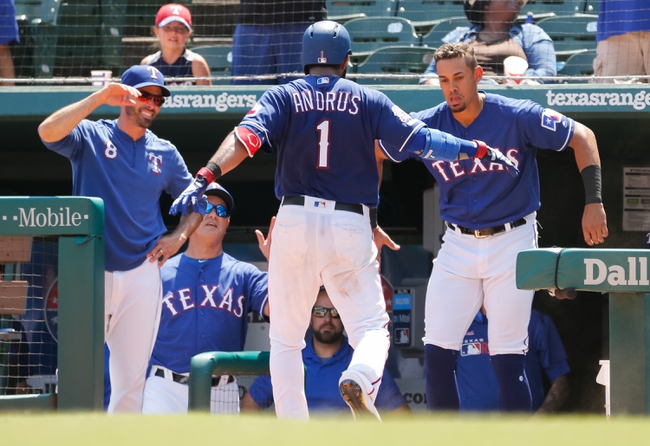 TV: FSSW, STOh Stream the MLB Game of the Day all season on ESPN+. Sign up now!

The Texas Rangers look for another win after winning six of their last nine games. The Rangers have scored 19 runs in their last three games and four or more runs in their last nine games. The Texas Rangers have won nine of their last 15 games when scoring four or more runs. Elvis Andrus leads the Rangers with 115 hits and 54 RBI while Shin-Soo Choo and Nomar Mazara have combined for 209 hits and 101 RBI. Ariel Jurado gets the ball, and he is 6-6 with a 4.92 ERA and 64 strikeouts this season. This will be Jurado’s first career game against the Indians.

The Cleveland Indians look to stay hot after winning eight of their last 11 games. The Indians have scored 20 runs in their last three games and four or more runs in 10 of their last 13 games. The Cleveland Indians have won 16 of their last 17 games when scoring four or more runs. Francisco Lindor leads the Indians with 118 hits and 48 RBI while Carlos Santana and Jose Ramirez have combined for 208 hits and 120 RBI. Aaron Civale gets the ball, and he is 1-0 with a 0.00 ERA and six strikeouts this season. This will be Civale’s first career game against the Rangers.

Jurado has allowed 34 hits and 22 earned runs in his last 28.1 innings, and he's had a real issues with control and keeping the ball in the park lately. Civale was solid in his major league debut, holding the Tigers to two hits and zero runs in six innings, but it's the Tigers and everybody looks good against them. Either way, backing a team with Jurado on the hill isn't an option for me given the way he's pitched these last two months, and the Cleveland Indians are in one of those grooves they usually get in this time of year where the losses rarely pop up. Give me the home team, and I'll take the RL to shave down the ML.