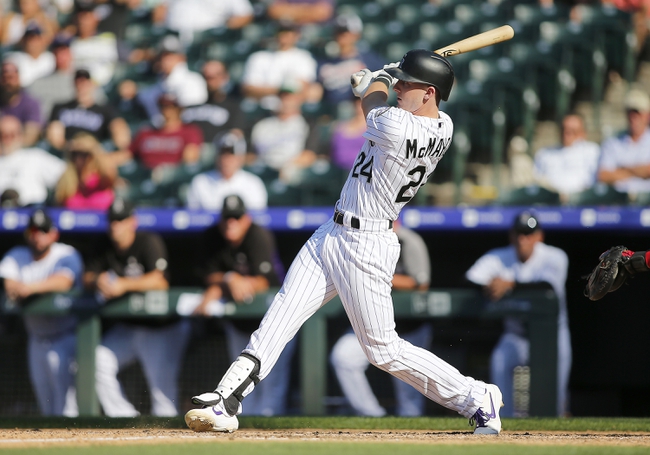 The Boston Red Sox and the Colorado Rockies meet in the opener of a two game interleague set in MLB action from Coors Field on Tuesday.

The Boston Red Sox will look to rebound after failing to complete the sweep of the Padres over the weekend following a 3-1 loss in Sunday’s series finale. J.D. Martinez’s solo home run was the lone run that Boston would plate in the losing effort while Sam Travis, Marco Hernandez and Brock Holt each had base hits as the BoSox had just four hits as a team in the losing effort. Brian Johnson took the loss, falling to 1-3 on the year after allowing three runs on four hits while walking three over three innings of work. Rick Porcello will start game one and is 11-10 with a 5.49 ERA and 112 strikeouts this season. In his career, Porcello is 2-1 with a 4.76 ERA and 13 strikeouts against Colorado.

The Colorado Rockies will look to pick up some momentum after a 3-1 win against Atlanta in a makeup game on Monday. Ryan McMahon had a home run and two RBIs while Charlie Blackmon added an RBI to finish off Colorado’s scoring as a team in the win. Trevor Story went 3 for 4 at the dish while Dom Nunez added a double and Nolan Arenado chipped in a base knock to round out Colorado’s offense as the Rockies had just six hits as a team in the victory. Tim Melville threw five shutout innings, giving up just five hits while walking three and striking out six, not factoring in the decision. Jairo Diaz got the win to improve to 5-3 on the year. Rico Garcia will make his major league debut here after going 2-4 with a 7.16 ERA and 45 strikeouts this season.

Garcia is making his major league debut here, which is strike one. Garcia’s making that start for a struggling Colorado team against a Boston team that has some serious pop in their bats. Strike two. Garcia’s success in AA where he went 8-2 with a 1.85 ERA hasn’t transferred to AAA where he was 2-4 with a brutal 7.16 ERA. Strike three. On the other hand, as good as Boston is, I’m not backing Porcello on the road as he hasn’t pitched away from Fenway in over a month and his last two road starts saw Porcello allow 12 runs in 10.2 innings against a pair of bad teams in Baltimore and Detroit. Imagine what will happen in the thin air of Coors Field. Which is why I’m going to side with the over even if the total is kind of high. I can see this one nearing 20 runs if everything goes according to plan.