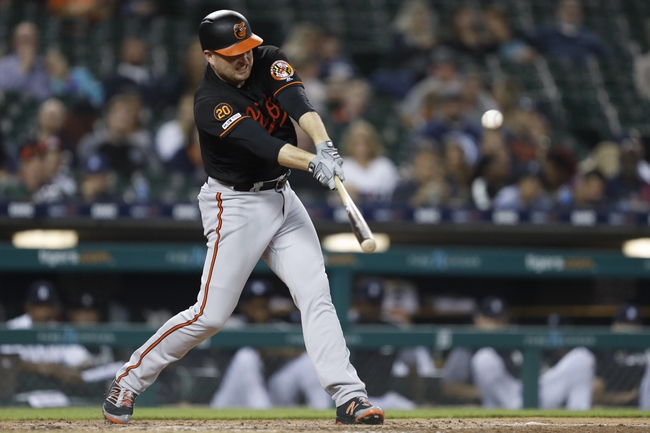 TV: FS-Detroit, MASN2 Stream the MLB Game of the Day all season on ESPN+. Sign up now!

The Baltimore Orioles and the Detroit Tigers meet in game two of their three game set in MLB action from Comerica Park on Saturday.

The Baltimore Orioles will look to build on their series opening 6-2 win over Detroit on Friday. Trey Mancini led the O’s with a home run and three RBIs while DJ Stewart had a home run and two RBIs. Mason Williams added an RBI to round out Baltimore’s scoring as a team in the winning effort. Jonathan Villar went 2 for 5 with a double while Stevie Wilkerson added two hits of his own with a double as well. Dwight Smith Jr, Mark Trumbo and Chance Sisco each added a base hit to finish off Baltimore’s offense as a team in the win. Aaron Brooks got the win to improve to 5-8 on the year after allowing two runs on seven hits over 5.1 innings of work. Gabriel Ynoa will start game two and is 1-8 with a 5.79 ERA and 60 strikeouts this season. This will be Ynoa’s second career start against Detroit.

The Detroit Tigers will look to bounce back after dropping game one on Friday. Jordy Mercer went 3 for 4 with a double and an RBI while Willi Castro added an RBI to round out Detroit’s scoring as a team in the loss. Harold Castro went 2 for 5 while Christin Stewart added a double and Travis Demeritte and Grayson Greiner each had a base hit to cap off Detroit’s offense in defeat. Jordan Zimmermann took the loss, falling to 1-11 on the year after allowing four runs on eight hits while striking out three over five innings of work. Daniel Norris will start game two and is 3-12 with a 4.72 ERA and 116 strikeouts this season. In his career, Norris is 1-2 with a 3.63 ERA and 12 strikeouts against Baltimore.

The Tigers are hard to get a grasp on with Norris on the mound as he hasn’t gone more than three innings in any of his last six starts. However, what I do know is that Detroit has been the most offensively disappointing team in the majors this season and while Baltimore hasn’t been much better, I have faith in the Orioles showing up more than I do Detroit. We’re also getting plus money with the team that looked better in the opener, so I’ll take it with Baltimore otherwise staying away from this dumpster fire of a game.