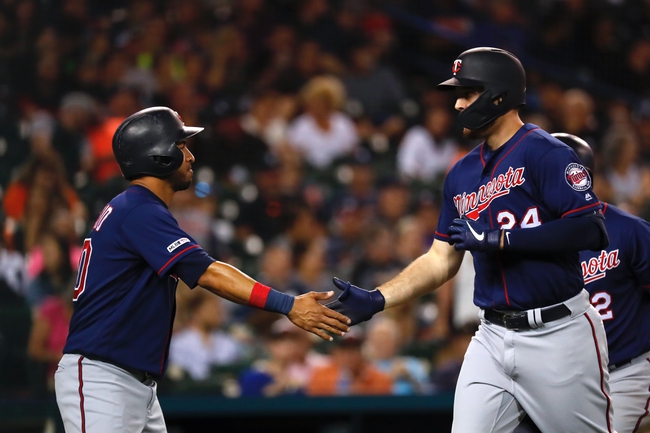 TV: FS-Detroit, FS-North Stream the MLB Game of the Day all season on ESPN+. Sign up now!

The Minnesota Twins and the Detroit Tigers meet in game two of a four game AL Central division set in MLB action from Comerica Park on Saturday.

The Minnesota Twins will look to build on their current winning streak which right now sits at six games following a 13-5 win in game one on Friday. C.J. Cron and Eddie Rosario each went 2 for 5 with three RBIs with Cron belting a home run and a double. Nelson Cruz went 3 for 4 with two RBIs while Max Kepler, Luis Arraez and Jake Cave each added an RBI with Kepler going 2 for 5 with a pair of doubles. Jorge Polanco went 3 for 4 at the dish while Jonathan Schoop added a base hit to finish off Minnesota’s offense as a team in the winning effort. Kyle Gibson gave up four runs on ten hits while striking out five over five innings of work to improve to 13-6 on the year. Martin Perez will start game two and is 9-5 with a 4.53 ERA and 116 strikeouts this season. In his career, Perez is 2-3 with a 5.50 ERA and 30 strikeouts against Detroit.

The Detroit Tigers will look to get back on the board and even up the set after dropping game one on Friday. Ronny Rodriguez went 2 for 4 with a home run, a double and two RBIs while John Hicks added a solo home run and a double as well.. Dawel Lugo and Jake Rogers each contributed an RBI to finish off Detroit’s scoring as a team in the loss. Victor Reyes went 2 for 5 with a double while Willi Castro went 2 for 4. Jordy Mercer and Travis Demeritte each put up a base hit to round out the Tigers’ offense in the losing effort. Edwin Jackson took the loss, falling to 3-8 on the year after allowing eight runs, six earned, on seven hits while walking three over 2.1 innings of work. Matt Boyd will start game two and is 6-10 with a 4.47 ERA and 208 strikeouts this season. In his career, Boyd is 6-6 with a 4.71 ERA and 93 strikeouts against Minnesota.

The only case you can make for Detroit is that Boyd’s had all of his success this season at home, but that’s where it stops. Perez has had his ups and downs, but his ERA is actually lower on the road and Boyd’s allowed ten runs in 13 innings against the Twins this season. All in all, this is a pretty good price for the Twins who are in a heated playoff race and need to win these winnable games against a Detroit team that’s mailed it in and is ready for the season to be over. I’ll lay the juice with Minnesota in this spot.