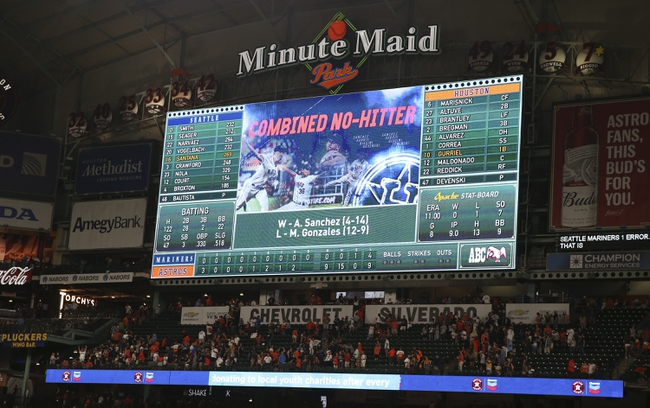 The Seattle Mariners and the Houston Astros meet in the finale of their three game AL West division set in MLB action from Minute Maid Park on Sunday.

The Seattle Mariners will look to salvage a win and avoid the sweep after being no-hit for the second time this season in a 9-0 loss to the ‘Stros on Saturday night. Domingo Santana, J.P. Crawford and Keon Broxton each had a pair of strikeouts with the M’s going 0 for 26 with 8 Ks as a team in the losing effort. Marco Gonzales ended up with the loss, falling to 12-9 on the year after allowing four runs on eight hits over five innings of work. The Mariners did not have a starting pitcher announced at the time of posting.

The Houston Astros will look to sweep Seattle for the 3rd time this season after taking game two on Saturday. Michael Brantley went 3 for 5 with a pair of doubles and four RBIs while Alex Bregman had a triple and two RBIs. Jose Altuve belted a solo home run along with a double while Yordan Alvarez and Yuli Gurriel each had an RBI to finish off Houston’s scoring as a team in the win with Gurriel chipping in a double. Carlos Correa had two hits with a double while Martin Maldonado, Josh Reddick and Jake Marisnick each had a base hit as well in the losing effort. Aaron Sanchez got the win in his Astros debut, giving up just a pair of walks while striking out six over six innings of work while Will Harris, Joe Biagini and Chris Devenski each threw an inning of relief in the no-hitter. Justin Verlander will start the finale and is 14-4 with a 2.73 ERA and 196 strikeouts this season. In his career, Verlander is 13-9 with a 3.38 ERA and 191 strikeouts against Seattle.

Even with no starter announced for Seattle, I’m expecting the Astros to be a heavy favorite with the AL Cy Young favorite on the mound in Verlander. But also, Houston has dominated Seattle this season, going 11-1 against the Mariners this season, leading the season series so far by a 69-44 score, including 19-2 in the first two games of this set. I just don’t see it being close with whoever is on the other side for the Mariners, so I’ll side with the Astros on the RL here as soon as the line is released.