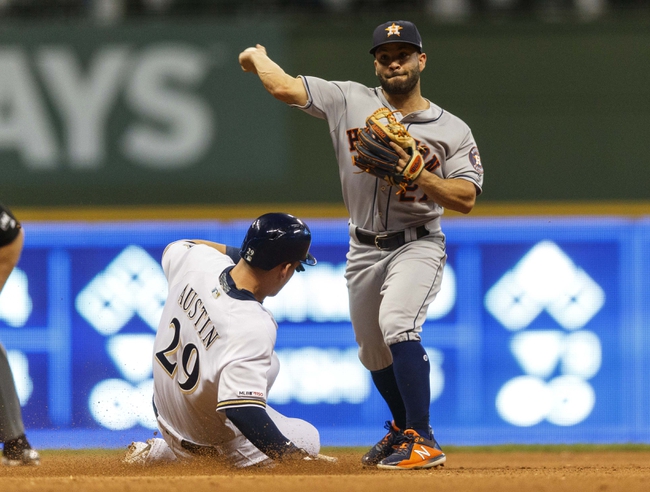 The Seattle Mariners and the Houston Astros meet in game one of a four game AL West division set in MLB action from Minute Maid Park on Thursday.

The Seattle Mariners will look to bounce back after being swept in a two game set with the Chicago Cubs to start the week, finishing with a 6-1 loss in Tuesday’s finale. Daniel Vogelbach had the Mariners’ lone RBI while Braden Bishop, Dylan Moore and Dee Gordon each had two hits. Kyle Seager and Ryan Court each had a base hit as well as none of Seattle’s nine base hits went for extra bases in the losing effort. Felix Hernandez took the loss, falling to 1-5 on the year after allowing two runs on two hits while walking four and striking out five over three innings of work. Marco Gonzales will start game one and is 14-11 with a 4.30 ERA and 128 strikeouts this season. In his career, Gonzales is 0-4 with a 7.50 ERA and 22 strikeouts against Houston.

The Houston Astros will look to bounce back after settling for a split with Milwaukee to start the week, following a 4-2 loss on Tuesday’s series finale. Alex Bregman went 2 for 4 with a solo home run while Josh Reddick added an RBI to finish off Houston’s scoring in defeat. Abraham Toro added a double while George Springer and Zack Greinke each chipped in a base hit to finish off Houston’s offense as the ‘Stros had just six hits as a team in the losing effort. Greinke took his first loss in a Houston uniform, allowing four runs on eight hits while striking out four over six innings of work. Wade Miley will start game one and is 13-4 with a 3.06 ERA and 134 strikeouts this season. In his career, Miley is 3-1 with a 3.40 ERA and 36 strikeouts against Seattle.

Miley’s not the first guy I think of when it comes to laying this kind of juice, but the fact is that the Astros have won 20 of last 27 starts, and Miley hasn’t taken a loss in two and a half months, allowing three runs or less in each of his last 12 starts. Gonzales on the other hand, despite leading Seattle in wins, has had some real issues dealing with Houston in his career, and simply isn’t a guy I’m looking to back in this spot, even with some heavy plus money. I’ll side with Houston for another win and to cut down some of the juice, I’ll back Houston on the RL.