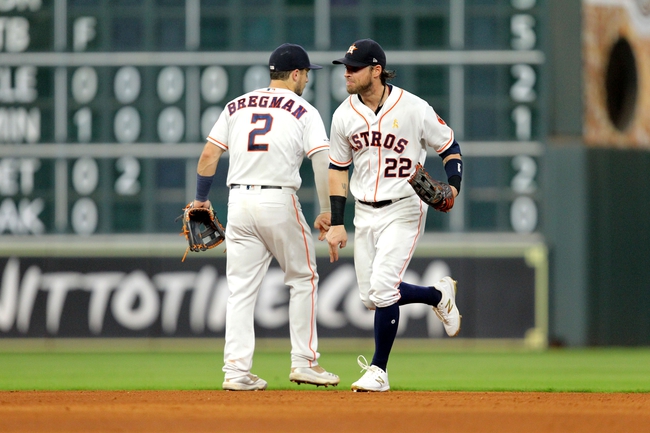 The Seattle Mariners and the Houston Astros meet in the finale of their four game AL West division set in MLB action from Minute Maid Park on Sunday.

The Seattle Mariners will look to snap a five game losing streak and avoid the sweep after a 2-1 loss in game three of the series on Saturday. Dee Gorgon went 3 for 3 with an RBI as the lone run that the Mariners would push across in the losing effort. Tim Lopes and Omar Narvaez each had a double to cap off Seattle’s offense as the Mariners mustered up just five hits as a team in the defeat. Yusei Kikuchi gave up one run on five hits while striking out five over five innings of work, not factoring in the decision. Austin Adams took the loss in relief to fall to 1-2. Felix Hernandez will start game four and is 1-5 with a 6.02 ERA and 46 strikeouts this season. In his career, Hernandez is 4-7 with a 4.42 ERA and 79 strikeouts against Houston.

The Houston Astros will look to complete the sweep after taking the first three games of the series with Saturday’s victory. Alex Bregman had a solo home run while Josh Reddick added an RBI to round out Houston’s scoring as a team in the win. Jose Altuve and Kyle Tucker each had a double while Yordan Alvarez, Aledmys Diaz and Abraham Toro each contributed a base hit to finish off Houston’s offense as the Astros had just six hits as a team in the win. Justin Verlander got the win to improve to 18-5 on the year after allowing one run on four hits while striking out seven over seven innings of work. Will Harris closed out the 9th for his 2nd save of the season. Gerrit Cole will start game four and is 15-5 with a 2.81 ERA and 266 strikeouts this season. In his career, Cole is 4-2 with a 2.25 ERA and 52 strikeouts against Seattle.

The heavy plus money is kind of tempting as Hernandez hasn’t been terrible since rejoining the Mariners’ rotation, and the possibility of tripling your money is also something to think about. However, Hernandez hasn’t been an ace-type pitcher for a couple of years now and Cole isn’t the pitcher I want to see on the other side when trying to convince myself otherwise. The Astros just don’t seem to lose with Cole on the mound, as they’ve won 19 of his last 22 starts since the end of April. I just think Houston wins this game handily, so to cut down some of this insane juice, I’ll take Houston on the RL and may have to take the -2.5 if it’s still not going down.