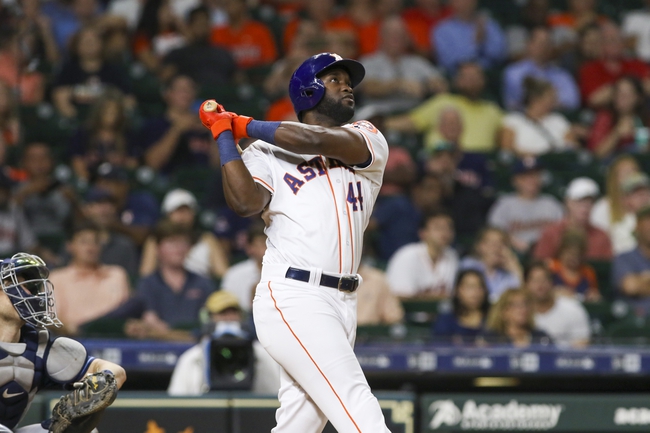 The Tampa Bay Rays and the Houston Astros meet in game two of a three game set in MLB action from Minute Maid Park on Wednesday.

The Tampa Bay Rays will look to bounce back on Wednesday after starting the series on the wrong foot after a 15-1 loss in game one on Tuesday. Joey Wendle’s solo home run was the lone RBI that the Rays would plate in the loss, while Tommy Pham and Willy Adames each went 2 for 3 with Pham putting up two doubles. Eric Sogard and Travis D’Arnaud each added a base hit to finish off Tampa’s offense as a team in the defeat. Charlie Morton took the loss, falling to 13-6 on the year after allowing six runs on seven hits while striking out four over four innings of work. Ryan Yarbrough will start game two and is 11-3 with a 3.29 ERA and 93 strikeouts this season. This will be Yarbrough’s first career start against Houston.

The Houston Astros will look to build on a dominant victory in game one in the second game of the set on Wednesday. Yordan Alvarez led the ‘Stros by going 3 for 5 with a pair of home runs, a double and four RBIs while Robinson Chirinos had a home run and three RBIs. Jake Marisnick and Yuli Gurriel each had two RBIs with Gurriel adding a double while George Springer, Jose Altuve, Aledmys Diaz and Josh Reddick each had an RBI to round out Houston’s scoring with Reddick going 3 for 4 with a triple and a double while Altuve had a double. Alex Bregman went 3 for 5 at the dish while Abraham Toro and Michael Brantley each had a base knock to round out Houston’s offense as a team in the victory. Justin Verlander got the win to improve to 16-5 on the year after throwing 5.1 shutout innings, allowing just four hits while striking out four. Gerrit Cole will start game two and is 15-5 with a 2.75 ERA and 238 strikeouts this season. In his career, Cole is 0-2 with a 2.84 ERA and 23 strikeouts against Tampa Bay.

Yarbrough has been one of the most, if not the most consistent arm in Tampa Bay’s pitching staff, and he’s only allowed one earned run in his last three starts spanning 19.1 innings of work. However, Houston took Tampa Bay to school on Tuesday night, and Cole has been nothing short of dominant, allowing two earned runs or less in 14 of his last 15 starts and hasn’t taken a loss over that span, going 10-0. That’s downright insane. It’s not often you get Cole around the -200 mark as of late, so I’ll take the Astros for another win and to cut down the heavy juice, since each of Houston’s last ten wins with Cole on the mound since June 14th have come by at least two runs, I’ll back Houston on the RL.