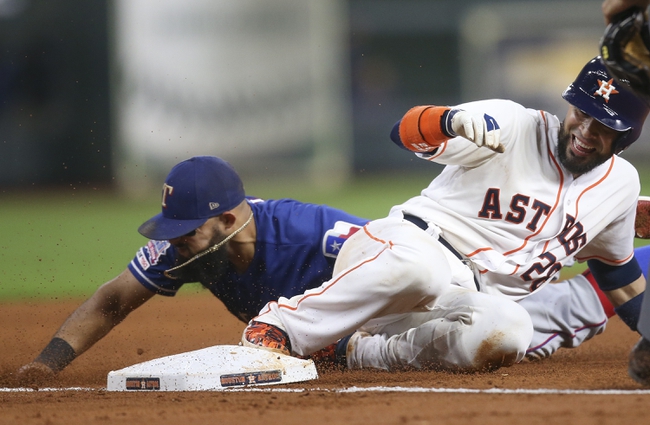 The Texas Rangers and the Houston Astros meet in the finale of their mini two game AL West division set in MLB action from Minute Maid Park on Wednesday.

The Texas Rangers will look to bounce back and salvage a split after dropping game one on Tuesday by a final score of 4-1. Nomar Mazara went 2 for 4 with a solo home run while Danny Santana added a double. Elvis Andrus, Willie Calhoun and Delino DeShields each had a base hit to finish off Texas’ offense as a team in the loss, with the Rangers batting in just six hits as a team in defeat. Lance Lynn took the loss, falling to 14-11 on the year after allowing four runs on seven hits while striking out eight over seven innings of work. Kolby Allard will start game two and is 4-0 with a 4.34 ERA and 30 strikeouts this season. This will be Allard’s first career start against Houston.

The Houston Astros will look to complete the sweep after the victory in game one on Tuesday. Alex Bregman, Yordan Alvarez and Yuli Gurriel each had a solo home run while George Springer added an RBI to round out Houston’s scoring as a team in the win. Robinson Chirinos went 2 for 3 with a triple while Jose Altuve added a base hit as well in the victory for the ‘Stros. Justin Verlander got the win to improve to 19-6 on the year after tossing six shutout innings, giving up just four this while striking out eight. Roberto Osuna closed out the 9th for his 34th save of the season. Gerrit Cole will start game two and is 17-5 with a 2.62 ERA and 292 strikeouts this season. In his career, Cole is 4-2 with a 3.98 ERA and 91 strikeouts against Texas.

I fully understand Houston being favored here with Cole on the mound as the Astros just don’t seem to lose with Cole on the bump. However, Allard’s been decent in his own right, allowing just one run in his last two starts on the road totalling 12.2 innings of work. Cole’s also allowed 16 earned runs in 22.1 innings against Texas this season, so while Houston probably wins this game, the prospect of almost making four times my money is too good to pass on. I’ll take a stab at Texas here.