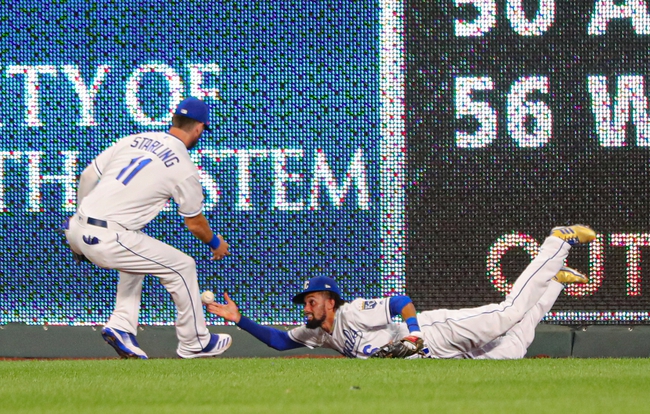 TV: FSKC Stream the MLB Game of the Day all season on ESPN+. Sign up now!

The Toronto Blue Jays and the Kansas City Royals will meet up on the MLB diamond Wednesday to finish their series.

In the Monday opener, the Jays powered out a 7-3 win. On Tuesday, Toronto kept it going, logging five runs in the ninth inning to cap a 9-2 vitory.

For Wednesday’s matchup, the Jays will be sending out Jacob Waguespack for the start. Across 24.0 innings and a 1-1 record this year, Waguespack has a 5.62 ERA with 22 Ks and seven walks.

Toronto logged 10 hits in the win Tuesday. Three batters (Bichette, Galvis and Guerrero) had two knocks apiece. Guerrero had a great game with five RBI and a grand slam.
Over on the Royals’ side, they’re going with Jakob Junis in the starting role. Over his 125.1 innings and 6-9 mark this season, Junis has a 5.03 ERA with 120 Ks and 45 BBs.

Kansas City had 11 hits on Tuesday but couldn’t do much with them. Three batters for the Royals had two hits apiece, and just one starter (O’Hearn) finished with an 0-fer.

Meanwhile, the Royals are 2-7 in their last nine Wednesday games and 18-61 in their last 79 in game three of a series. KC is 2-5 in Junis’ last seven starts and 2-6 in his last eight home starts.

Waguespack’s body of work this year is pretty limited, but on the whole he’s been okay. Across his three starts this season he’s put up 10 earned runs in 15.0 innings.

As for Junis, he had a string of three straight quality starts broken in his last outing, giving up six earned on 10 hits in 6.0 innings versus the Indians. Still, I like Junis to get back on track here and help the Royals get a home finale win.