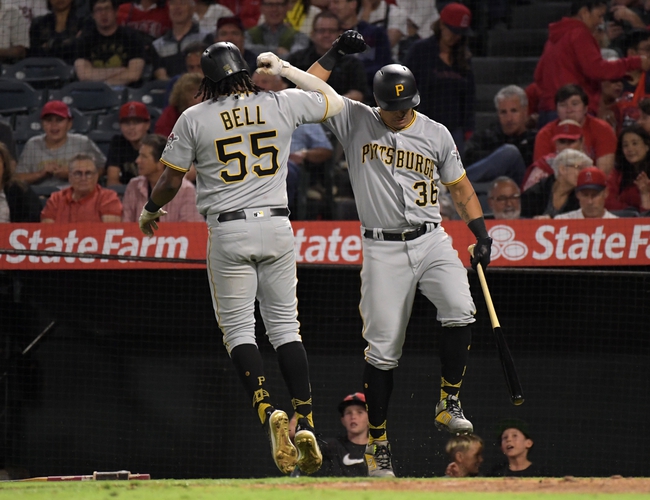 TV: FS-West Stream the MLB Game of the Day all season on ESPN+. Sign up now!

The Pittsburgh Pirates and the Los Angeles Angels meet in game two of their three game interleague set in MLB action from Angel Stadium on Tuesday night.

The Pittsburgh Pirates will look to keep their momentum going after opening the series with a 10-2 win over the Angels in Monday’s series opener. Jacob Stallings went 2 for 3 with a home run, a double and three RBIs while Josh Bell had a homer and two RBIs. Kevin Newman and Bryan Reynolds each had a solo home run while Jose Osuna had a double and an RBI. Starling Marte went 3 for 5 with a double while Pablo Reyes and Melky Cabrera each had a base hit as well in the victory. Mitch Keller got the win to improve to 1-1 on the year after giving up two runs, one earned, on five hits while striking out four over five innings of work. Trevor Williams will start game two and is 4-5 with a 5.06 ERA and 78 strikeouts this season. This will be Williams’ first career start against the Angels.

The Los Angeles Angels will look to bounce back after dropping the series opener on Monday. Max Stassi had an RBI while Luis Rengifo and Kole Calhoun each had two hits. Shohei Ohtani, Justin Upton, Matt Thaiss and Wilfredo Tovar each had a base hit as none of L.A.’s nine hits went for extra bases in the losing effort. Jose Suarez took the loss, falling to 2-4 on the year after allowing six runs, four earned, on seven hits over just three innings of work. Griffin Canning will start game two and is 4-6 with a 4.76 ERA and 86 strikeouts this season. This will be Canning’s first career start against Pittsburgh.

The Pirates got the win in game one, and are worth a look at plus money given the fact that Williams is a better pitcher on the road than at home. However, the Pirates have still lost 24 of their last 29 games, and the Bucs haven’t won back-to-back games since the beginning of July. Los Angeles is just as far out in the AL wild card race, but the Angels have the better lineup and have a lot of recent success with Canning on the bump, including six shutout innings from Canning in his last start. The price isn’t pretty, but the Angels should even up the series at one win apiece here.