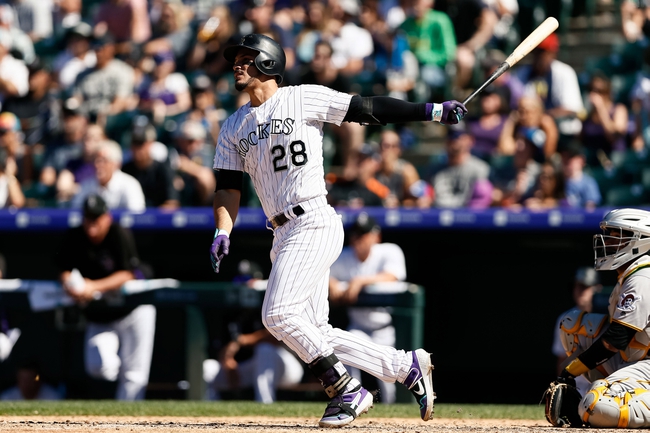 The Colorado Rockies and the Los Angeles Dodgers meet in game one of a three game NL West division set in MLB action from Dodger Stadium on Monday.

The Colorado Rockies will look for a win to snap a six game losing streak after being swept for the second straight series, with a 6-2 loss to Pittsburgh in Sunday’s series finale giving Colorado their 10th loss in their last 11 games and 12th in their last 14 outings. Nolan Arenado had a solo home run while Tony Wolters added an RBI to round out Colorado’s scoring as a team in the loss. Ryan McMahon and Pat Valaika each added a base hit as the Rockies mustered up just four hits as a team in the losing effort. Jeff Hoffman took the loss, falling to 1-5 on the year after allowing two runs on nine hits over five innings of work. Peter Lambert will start game one and is 2-5 with a 6.63 ERA and 48 strikeouts this season. In his career, Lambert is 0-0 with a 7.45 ERA and 3 strikeouts against the Dodgers.

The Los Angeles Dodgers will look to build up some momentum after avoiding a four game sweep at the hands of the Arizona Diamondbacks with a 4-3 win in extra innings in Sunday’s series finale. All of L.A.’s scoring came via the long ball, as David Freese, Joc Pederson, Cody Bellinger and Russell Martin each added a solo homer to round out the Dodgers’ scoring as a team in the win. A.J. Pollock went 2 for 5 while Chris Taylor added a base hit to finish off L.A.’s offense as a team in the victory. Ross Stripling threw three scoreless innings, but it was Casey Sadler who got the win in relief to improve to 4-0 while Pedro Baez picked up the save. Walker Buehler will start game one and is 11-3 with a 3.03 ERA and 185 strikeouts this season. In his career, Buehler is 3-1 with a 3.59 ERA and 66 strikeouts against Colorado.

I’d like to take Colorado and the heavy plus money, but the problem is that Lambert simply hasn’t pitched well enough to warrant taking a shot on it and it doesn’t help matters that Buehler is on the other side, sitting on back-to-back shutouts and shutouts in three of his last four starts spanning at least six innings. Buehler has also allowed just one run in his last four starts at home totalling 29 innings of work. That’s just nuts. I’ll side with the Dodgers to draw first blood here and to get rid of some of the heavy juice, I’ll back the Dodgers on the RL.