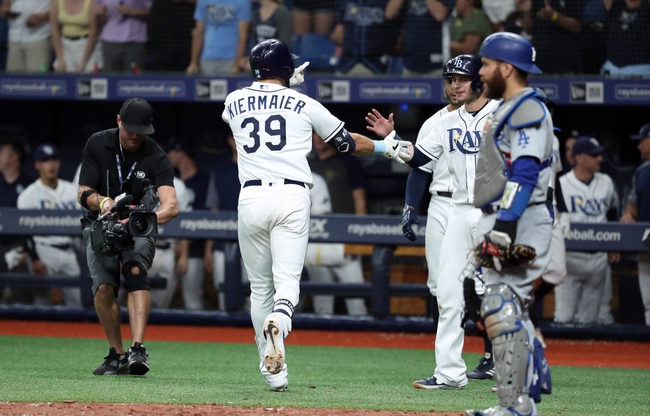 The Tampa Bay Rays need a win after splitting their last six games. The Rays have scored 18 runs in their last three games and four or more runs in 10 of their last 13 games. The Tampa Bay Rays have won seven fo their last 10 games when scoring four or more runs. Tommy Pham leads the Rays with 145 hits and 64 RBI while Austin Meadows and Avisail Garcia have combined for 272 hits and 156 RBI. Blake Snell gets the ball, and he is 6-7 with a 4.28 ERA and 136 strikeouts this season. This will be Snell’s first career game against the Dodgers.

The Los Angeles Dodgers look for a win after winning five of their last seven games. The Dodgers have scored 12 runs in their last three games and four or more runs in 10 of their last 14 games. The Los Angeles Dodgers have won nine of their last 11 games when scoring at least one run. Cody Bellinger leads the Dodgers with 159 hits and 108 RBI while Justin Turner and Corey Seager have combined for 256 hits and 142 RBI. Ross Stripling gets the ball, and he is 4-4 with a 3.40 ERA and 82 strikeouts this season. Stripling is 0-0 with a 0.00 ERA and three strikeouts in his career against the Rays.

Snell has allowed 11 hits and two runs in his last 16 innings, but he hasn't pitched since July due to elbow surgery. Stripling has allowed six hits and one run in his last eight innings, and he has a 3.27 ERA and .232 allowed batting average at home. It's always risky to back a team led by a pitcher who has missed a chunk of time with an injury, but the Rays have found ways to win all year despite not having the pitching advantage. The Rays are playing better baseball overall and have slightly more to play for given that their playoff spot isn't guaranteed like the Dodgers. I'll take a shot with the Rays and the plus money.