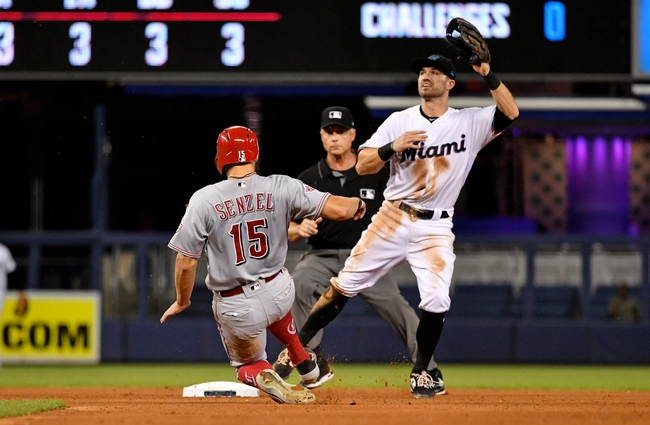 TV: FS-Florida, FS-Ohio Stream the MLB Game of the Day all season on ESPN+. Sign up now!

The Cincinnati Reds and the Miami Marlins meet in game three of a four game set in MLB action from Marlins Park on Wednesday.

The Cincinnati Reds will look to win the series and push for a four game sweep on Thursday after winning the first two games of the set with an 8-5 victory on Tuesday. Nick Senzel and Curt Casali each had two hits with a home run and three RBIs while Eugenio Suarez fell a triple short of the cycle, going 3 for 5 with a home run, a double and two RBIs to finish off the Reds’ scoring as a team in the winning effort. Jose Iglesias and Luis Castillo each had two hits while Phillip Ervin added a triple to finish off Cincinnati’s scoring as a team in the victory. Castillo got the win to improve to 13-5 on the year after allowing all five runs on seven hits while striking out 11 over six innings of work. Raisel Iglesias closed out the 9th for his 27th save of the year. Anthony DeSclafani will start game three and is 8-7 with a 4.27 ERA and 131 strikeouts this season. In his career, DeSclafani is 1-2 with a 4.32 ERA and 19 strikeouts against Miami.

The Miami Marlins will look to bounce back and find a win after another loss in game two on Tuesday. Isan Diaz and Jorge Alfaro each had two RBIs with Alfaro going 2 for 4 with a home run while Diaz had a double. Austin Dean added an RBI to round out Miami’s scoring as a team in the loss while Jon Berti went 3 for 5 with a double. Harold Ramirez, Garrett Cooper and Lewis Brinson each had base hits to cap off Miami’s offense as a team in the defeat. Caleb Smith took the loss, falling to 8-8 after allowing five runs on five hits while walking three and striking out five over 4.2 innings of work. Sandy Alcantara will start game three and is 4-11 with a 4.15 ERA and 108 strikeouts this season. This will be Alcantara’s first career start against Cincinnati.

I’d like to give Miami a shot here, but the fact is that the Marlins keep finding ways to lose games and the value that Miami provided in an underdog role earlier in the season is now gone. And while he’s pitched okay as of late, Alcantara’s been beaten up at home, where his ERA is almost a full run higher compared to his mark on the road. DeSclafani hasn’t been great on the road in all fairness, but the Reds are back on track and are looking to bring some positive vibes and some hope for next season. Simply put, the Marlins are not a team worth getting behind right now, so Cincinnati and the reasonable line is the play for me here.