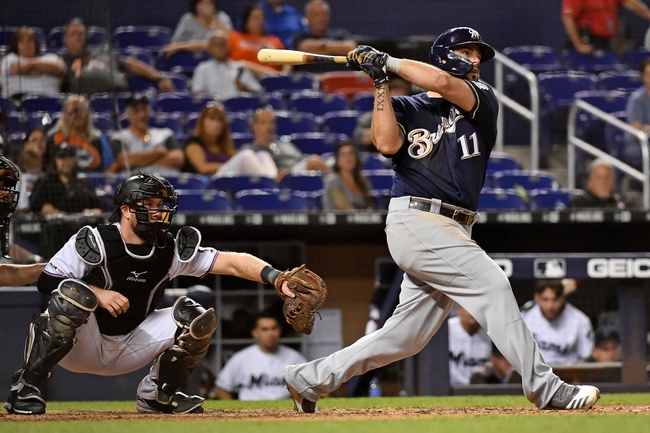 The Milwaukee Brewers and the Miami Marlins meet in the finale of their four game set in MLB action from Marlins Park on Thursday afternoon.

The Milwaukee Brewers will look to complete the sweep after taking game three of the series on Wednesday by a final score of 7-5, pushing their winning streak to six. Mike Moustakas went 3 for 4 with a pair of home runs and five RBIs. Trent Grisham had a solo home run while Zach Davies had an RBI to round out Milwaukee’s scoring as a team in the win. Hernan Perez had a double while Ben Gamel and Cory Spangenberg each added a base hit to finish off the Brew Crew’s offense in the victory. Davies allowed three runs on four hits while striking out three over 4.1 innings of work, not factoring in the decision. Brent Suter got the win in relief to improve to 2-0 while Josh Hader picked up his 30th save of the season. Gio Gonzalez will start game four and is 2-2 with a 3.98 ERA and 63 strikeouts this season. In his career, Gonzalez is 10-4 with a 2.42 ERA and 116 strikeouts against Miami.

The Miami Marlins will look to salvage a win and avoid the sweep after dropping game three on Wednesday. Isan Diaz had a home run and three RBIs while Garrett Cooper went 2 for 4 with a solo home run. Magneuris Sierra went 2 for 3 with an RBI and Starlin Castro added an RBI of his own to round out Miami’s scoring in the loss. Harold Ramirez had a triple while Martin Prado and Miguel Rojas each had a base hit to cap off Miami’s offense as a team in defeat. Pablo Lopez allowed five runs on five hits while walking four over five innings of work, not factoring in the decision. Jose Urena took the loss, falling to 4-9 on the year in defeat. Caleb Smith will start game four and is 8-9 with a 4.11 ERA and 156 strikeouts this season. In his career, Smith is 0-2 with a 4.91 ERA and 12 strikeouts against Milwaukee.

It’s no secret that Smith has been a better pitcher at home compared to his mark on the road, and Smith just threw six shutout innings at home in his last start. However, the Marlins lost that game by giving up seven runs the rest of the way, and have now lost each of Smith’s last four starts and six of the last seven. Gonzalez hasn’t gone deep into games this season, and the Brewers aren’t the most consistent with him on the mound, and the loss of Yelich isn’t going to help anything. But Milwaukee seems to have banded together knowing that they have to pick each other up down the stretch, and their recent winning streak has pushed the Brewers right behind the rival Cubs in the wild card race. Everything considered, this is a really good price for a red hot Brewers team against a Marlins squad that has nothing to play for but pride and is just counting down the days for the season to end. I’ll side with Milwaukee for the sweep here.