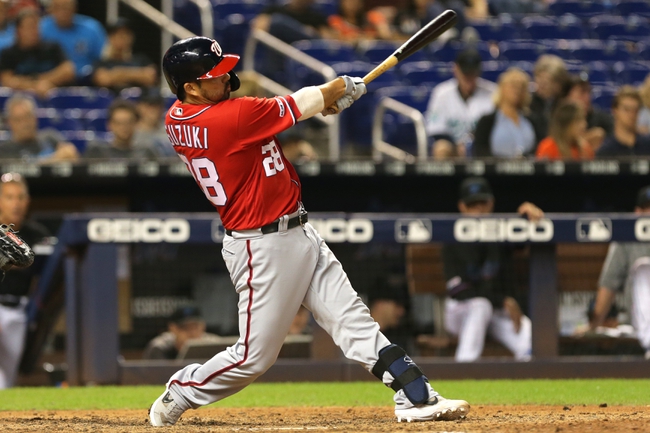 The Washington Nationals and the Miami Marlins meet in the finale of their three game NL East division set in MLB action from Marlins Park on Sunday afternoon.

The Washington Nationals will look to complete a key sweep after taking game two on Saturday in extra innings by a final score of 10-4. Kurt Suzuki had a double and three RBIs while Adam Eaton, Juan Soto, Asdrubal Cabrera, Victor Robles, Yan Gomes, Stephen Strasburg and Brian Dozier each had an RBI to cap off Washington’s scoring in the win with Gomes adding a double. Trea Turner added a double of his own while Ryan Zimmerman went 3 for 6 to finish off Washington’s offense in the victory. Stephen Strasburg threw seven shutout innings, giving up three hits while striking out six, not factoring in the decision while Wander Suero picked up the win to improve to 6-8 on the year. Austin Voth will start game three and is 1-1 with a 3.58 ERA and 36 strikeouts this season. This will be Voth’s first career start against Miami.

The Miami Marlins will look to avoid the sweep and salvage a win after dropping game two on Saturday. Austin Dean had a double and three RBIs while Starlin Castro added a double and an RBI as well in the loss. Miguel Rojas added a pair of doubles and Miguel Rojas had a pair of base hits as well while Magneuris Sierra had a base hit to finish off Miami’s offense in the defeat. Jordan Yamamoto allowed two runs on six hits while walking and whiffing three each over 4.1 innings of work, not factoring in the decision while Jose Urena took the loss, falling to 4-10 on the year. Pablo Lopez will start game three and is 5-8 with a 4.94 ERA and 91 strikeouts this season. In his career, Lopez is 0-2 with a 9.87 ERA and 8 strikeouts against Washington.

Voth isn’t the kind of pitcher I want to lay this price on the road with, but he certainly beats the alternative as Lopez has done nothing but get whacked around like a pinata when he takes the mound against the Nationals, allowing 19 runs in 17.1 career innings, including 10 runs in 6.2 innings this season. This game just means more to Washington and we’ve cashed with the Nationals on the RL in each of the first two games, including an outrageous cover last night in extras, so why not make it three in a row? I’ll side with Washington on the RL.