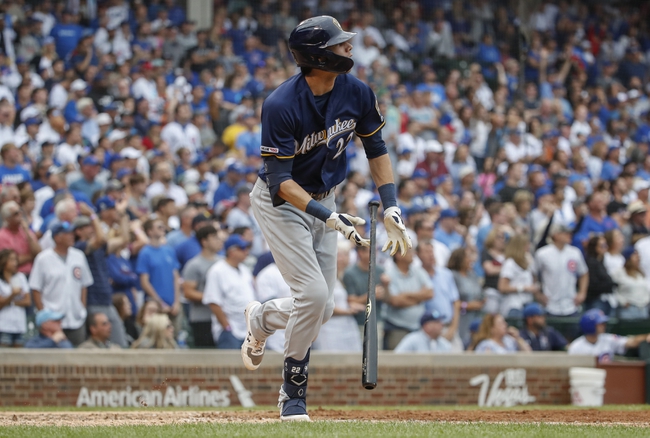 The Chicago Cubs and the Milwaukee Brewers meet in game one of a four game NL Central division set in MLB action from Miller Park on Thursday.

The Chicago Cubs will look to build some momentum after completing a two game sweep of the Seattle Mariners with a 6-1 win in Tuesday’s finale. Nick Castellanos went 2 for 3 with a home run and four RBIs while Kyle Schwarber and Willson Contreras each added a solo home run with Schwarber going 3 for 3 with a double as well. Ben Zobrist added a base hit to finish off Chicago’s scoring as a team in the winning effort. Jon Lester got the win to improve to 12-9 on the year after tossing six shutout innings, giving up six hits while walking four and striking out nine. Jose Quintana will start game one and is 12-8 with a 3.90 ERA and 137 strikeouts this season. In his career, Quintana is 8-4 with a 2.65 ERA and 87 strikeouts against Milwaukee.

The Milwaukee Brewers will look to make up some ground in the playoff race after earning a series split with the Houston Astros to start the week following a 4-2 win in Tuesday’s series finale. Eric Thames went 2 for 3 with a home run, a double and three RBIs while Ryan Braun added an RBI to make up Milwaukee’s scoring as a team in the win. Yasmani Grandal went 2 for 4 with a double while Christian Yelich added a double of his own. Trent Grisham, Cory Spangenberg and Orlando Arcia each added a base knock to finish off Milwaukee’s offense as a team in the win. Jordan Lyles got the win to improve to 10-8 on the year after allowing two runs on six hits over 6.1 innings of work. Josh Hader closed out the 9th for his 28th save of the season. Chase Anderson will start game one and is 6-4 with a 4.58 ERA and 106 strikeouts this season. In his career, Anderson is 5-5 with a 3.27 ERA and 54 strikeouts against the Cubs.

The plus money is tempting with Milwaukee at home, considering that the Brewers are in a more dangerous position sitting on the outside looking in when it comes to the playoff race. However, Anderson is still a pitcher that’s allowed 15 runs in his last 11.1 innings across his last three starts. Granted, the shutout sandwiched in the middle came at home so the 15 runs came in two starts on the road, but five of those runs came against these same Cubs in his last start in just four innings of work. On the other hand, Quintana’s got a 5.54 ERA against Milwaukee this season and a 12.91 ERA at Miller Park this season and to be honest, I just don’t trust the Cubs on the road as much as I do at Wrigley as they’re a Jekyll and Hyde situation home and away. Instead, I’ll side with the over as I think both offenses are capable of combining for double-digit runs on Thursday.