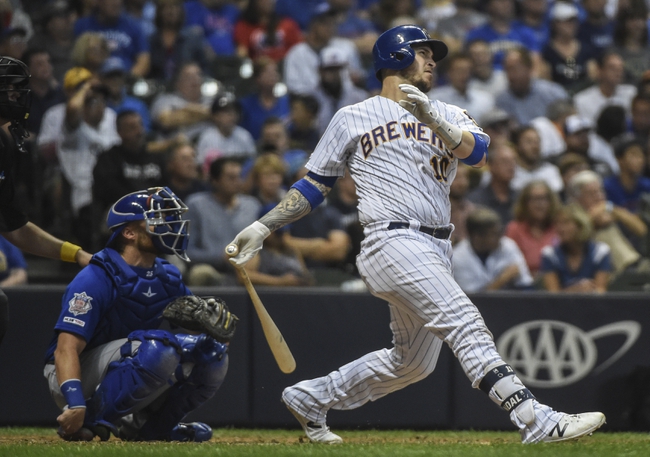 The Chicago Cubs and the Milwaukee Brewers meet in the finale of their four game NL Central division set in MLB action from Miller Park on Sunday.

The Chicago Cubs will look to rebound and earn a series split after dropping game three on Saturday by a final count of 3-2. Addison Russell had a solo home run while Anthony Rizzo added an RBI to round out Chicago’s scoring as a team in the losing effort. Nick Castellanos had a double while Victor Caratini and Ben Zobrist each had a base hit to finish off Chicago’s offense as the Cubs had just four hits as a team in the losing effort. Yu Darvish threw five shutout innings, giving up just three hits while striking out seven, not factoring in the decision. Brandon Kintzler received the loss in relief to fall to 3-3 on the year. Jon Lester will start game four and is 12-9 with a 4.19 ERA and 147 strikeouts this season. In his career, Lester is 5-3 with a 2.10 ERA and 66 strikeouts against Milwaukee.

The Milwaukee Brewers will look to pick up another key win after taking game three on Saturday. Yasmani Grandal and Christian Yelich each had two hits with an RBI with Grandal hitting a solo home run while Yelich added a double. Ben Gamel added an RBI to finish off Milwaukee’s scoring as a team in the win while Cory Spangenberg and Trent Grisham each added a base hit to cap off Milwaukee’s offense as a team in the victory. Gio Gonzalez allowed one run on two hits while striking out three over five innings of work, not factoring in the decision. Josh Hader got the win to improve his record to 3-5 on the year. Adrian Houser will start game four and is 6-5 with a 3.45 ERA and 93 strikeouts this season. This will be Houser’s second career start against the Cubs.

The low line with the Brewers is tempting at home as they’ve been the better team in the last couple of games and Houser’s allowed just one earned run in each of his last five starts. However, while Lester’s had his ups and downs and Chicago’s had issues away from Wrigley, Lester’s still the more experienced pitcher here and is prepared for key situations like these. Lester’s allowed just one run in 18 innings across his last three road starts and he’s yet to allow an earned run in 13.2 innings in two starts against Milwaukee this season. I’ll lay the juice with the Cubs to salvage a split in Sunday’s finale.