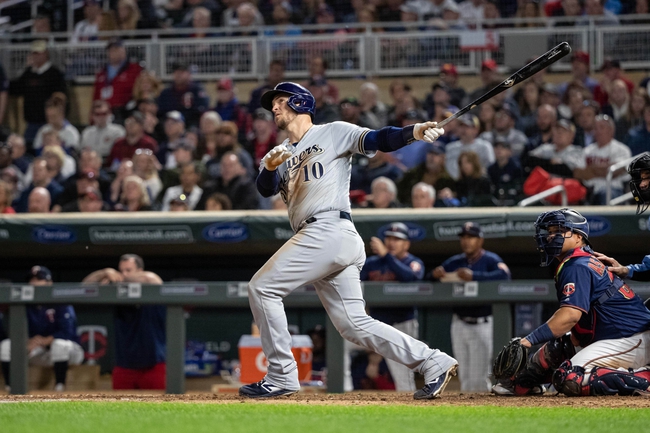 TV: FS-North, FS-Wisconsin Stream the MLB Game of the Day all season on ESPN+. Sign up now!

The Minnesota Twins and the Milwaukee Brewers meet in game one of a mini two game interleague set in MLB action from Miller Park on Tuesday night.

The Minnesota Twins will look to rebound after losing five of their last six games, including their series with Cleveland following a 7-3 loss in Sunday’s series finale. Luis Arraez went 2 for 4 with a home run and two RBIs while Marwin Gonzalez went 2 for 4 with a double and an RBi to finish off Minnesota’s offense as a team in the losing effort. Eddie Rosario went 2 for 4 with a pair of doubles while C.J. Cron also went 2 for 4 and Jonathan Schoop added a base hit as well in the defeat to cap off the Twins’ offense. Jose Berrios gave up three runs on six hits while striking out four over six innings of work, not factoring in the decision. Taylor Rogers took the loss, falling to 2-3 on the year after allowing four runs on three hits in the 9th inning. Martin Perez will start game one and is 8-5 with a 4.80 ERA and 106 strikeouts this season. This will be Perez’s second career start against Milwaukee.

The Milwaukee Brewers will look to bounce back after having their five game winning streak snapped with a 1-0 loss to Texas in Sunday’s series finale, failing to complete the sweep in the process. Ryan Braun went 2 for 4 while Hernan Perez chipped in a double and Manny Pina added a base hit as well as the Brew Crew had just four hits as a team in the losing effort. Jordan Lyles was a hard luck loser in the finale, giving up just one run on three hits while walking four and striking out nine over seven innings of work to fall to 7-8 on the year. Chase Anderson will start game one and is 5-2 with a 3.70 ERA and 94 strikeouts this season. In his career, Anderson is 0-1 with a 3.97 ERA and 9 strikeouts against Minnesota.

Getting Minnesota at plus money is tempting considering that the Twins need to pick up as many wins as possible right now with the Indians breathing down their necks, especially with Cleveland taking three of the four game from their series over the weekend. However, Milwaukee needs these wins just as badly, with their wild card lives hanging in the balance at the moment. Perez has also been rocked lately, giving up at least five runs in three of his last four starts, giving up 20 runs, 19 earned, across 21 innings of work in that span and his lone career start against Minnesota went horribly, giving up eight runs in 6.2 innings of work. I just trust Anderson more than I do Perez too, so I’ll lay the juice with Milwaukee to pick up a win here.