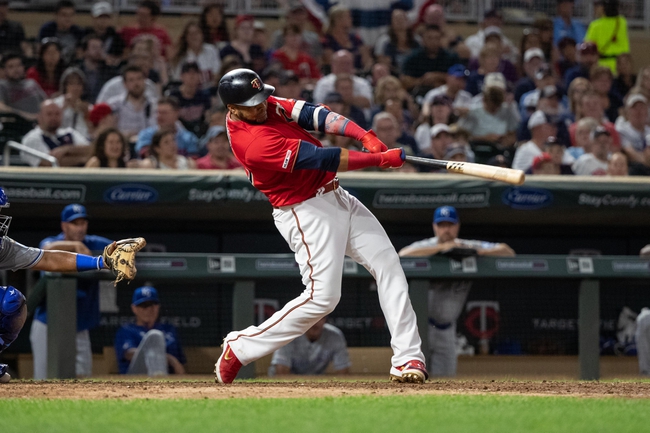 TV: FS-North, FS-Kansas City Stream the MLB Game of the Day all season on ESPN+. Sign up now!

The Kansas City Royals and the Minnesota Twins meet in the finale of their three game AL Central division set in MLB action from Target Field on Sunday.

The Kansas City Royals will look to salvage a win and snap a five game losing streak in the process after an 11-3 beatdown in game two on Saturday. Melbrys Viloria had two RBIs while Jorge Soler went 2 for 3 with a solo home run to finish off KC’s scoring as a team in the losing effort. Cheslor Cuthbert and Nicky Lopez each had a base knock as well as the Royals cranked out just five hits as a team in the loss. Danny Duffy took the loss, falling to 5-5 on the year after allowing nine runs, eight earned, on eight hits while striking out five over 4.2 innings of work. Brad Keller will start game three and is 7-10 with a 4.01 ERA and 99 strikeouts this season. In his career, Keller is 1-0 with a 2.74 ERA and 21 strikeouts against Minnesota.

The Minnesota Twins will look to complete the sweep after putting up 11 runs in back-to-back games following their victory on Saturday. Belson Cruz went off, hitting three home runs while putting up five RBIs while Jorge Polanco had a home run and three RBIs and C.J. Cron went 3 for 4 with a home run and two RBIs. Max Kepler added an RBI as well to finish off Minnesota’s scoring as a team in the win while Luis Arraez had two hits and Marwin Gonzalez and Jonathan Schoop each chipped in base hits to sum up the Twins’ offense in the win. Kyle Gibson got the win to improve to 10-4 on the year after giving up three runs, two earned, on four hits while striking out six over 6.2 innings of work. Jake Odorizzi will start the finale and is 12.5 with a 3.73 ERA and 113 strikeouts this season. In his career, Odorizzi is 3-5 with a 4.88 ERA and 53 strikeouts against Kansas City.

The plus money with the Royals is worth a look given Keller’s recent results, with the Royals winning five of Keller’s starts in a row before faltering last time out. Keller also has some solid numbers against the Twins in his career. However, Kansas City is back in one of those slumps where not much is going right, and that spells trouble when Minnesota is mashing the ball the way they have been lately and while Odorizzi hit a bit of a bumpy patch, he appears to be back on track. I’ll side with Minnesota for the sweep here and to get rid of some of the juice, I’ll back the Twins on the RL.