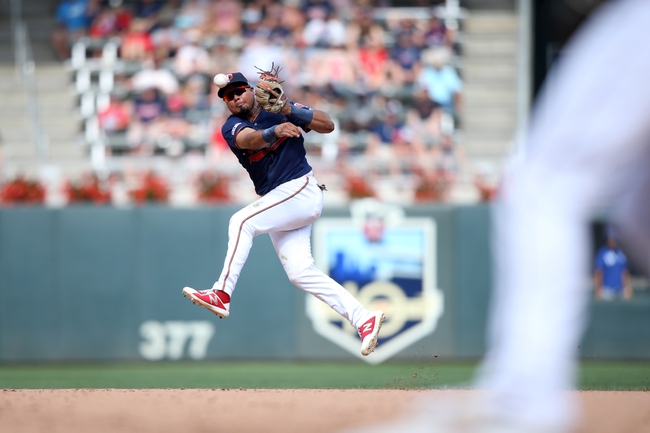 The Kansas City Royals and the Minnesota Twins meet in game one of a four game AL Central division set from Target Field on Thursday.

The Kansas City Royals will look to rebound after losing their series with Oakland to start the week, dropping Wednesday’s series finale by a final score of 1-0 in extra innings. Alex Gordon went 2 for 3 at the dish while Jorge Soler added a double and Bubba Starling added a base hit to cap off KC’s offense as the Royals had just four hits as a team in the loss. Danny Duffy threw seven shutout innings, giving up just two hits while striking out six, not factoring in the decision. Jesse Hahn took the loss in relief, falling to 0-1 on the year. Mike Montgomery will start game one and is 3-9 with a 4.70 ERA and 62 strikeouts this season. In his career, Montgomery is 1-0 with a 2.77 ERA and 13 strikeouts against Minnesota.

The Minnesota Twins will look to bounce back after failing to complete the sweep of the White Sox, dropping Wednesday’s series finale by a final score of 3-1 on Wednesday. Eddie Rosario went 2 for 4 with a double and an RBI and Jorge Polanco added a base hit of his own to finish off the Twins’ offense as Minnesota had just three hits as a team in the losing effort. Jake Odorizzi took the loss, falling to 14-7 on the year after allowing two runs on seven hits while striking out nine over 5.2 innings of work. Kyle Gibson will start game one and is 13-7 with a 4.76 ERA and 151 strikeouts this season. In his career, Gibson is 9-5 with a 3.55 ERA and 95 strikeouts against Kansas City.

Minnesota should be favored here as they’re the only team going anywhere in the next couple of weeks, but Gibson’s been one of the weaker pieces in the Twins’ rotation, allowing four or more runs in five of his last six starts. Montgomery’s had some decent showings lately, but those have come at home, and Montgomery’s allowed five runs in back-to-back road starts, giving up a total of ten runs in his last nine innings of work away from home. I don’t trust the pitching matchup at all, so I’ll side with the over here as I think both offenses can combine to push this one over the number on Thursday.