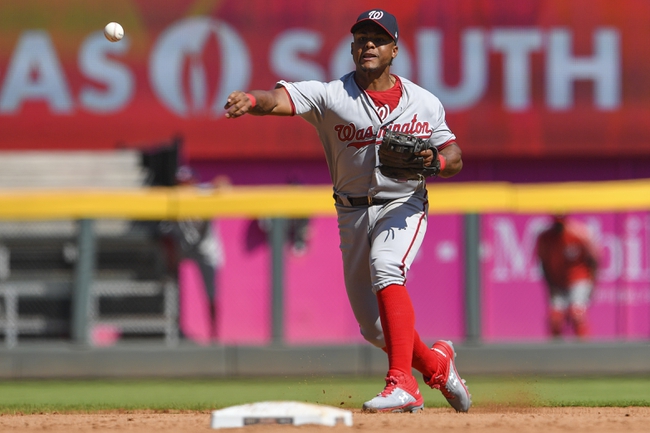 TV: FS-North, MASN2 Stream the MLB Game of the Day all season on ESPN+. Sign up now!

The Washington Nationals and the Minnesota Twins meet in game one of a three game interleague set from Target Field in MLB action on Tuesday night.

The Washington Nationals will look to build some steam after salvaging a 9-4 win in the finale of their four game series with Atlanta to avoid the sweep. Adam Eaton and Asdrubal Cabrera each had three RBIs with Eaton going 2 for 4 with a home run and a double while Cabrera went 4 for 5 with a double as well. Yan Gomes had a pair of solo home runs while Juan Soto added a solo home run of his own to round out Washington’s scoring in the win. Anthony Rendon went 2 for 4 with a pair of doubles and Victor Robles also had two hits with a double while Trea Turner, Wilmer Difo, Max Scherzer and Brian Dozier each had a base hit to cap off Washington’s offense in the defeat. Scherzer got the win to improve to 10-5 on the year after allowing one run on two hits while striking out nine over six innings of work. Anibal Sanchez will start game one and is 8-7 with a 4.11 ERA and 118 strikeouts this season. In his career, Sanchez is 6-6 with a 3.98 ERA and 116 strikeeouts against Minnesota.

The Minnesota Twins will look to bounce back after losing their series with Cleveland, dropping Sunday’s series finale by a final score of 5-2. Mitch Garver had a solo home run while LaMonte Wade Jr. had an RBI to round out Minnesota’s scoring as a team in the loss. Willians Astudillo and Ehire Adrianza each had a double while Luis Arraez added a base hit as the Twins had just five hits as a team in the losing effort. Randy Dobnak took the loss, falling to 0-1 after allowing two runs on three hits in just two innings of work in the start. Jose Berrios will start game one and is 11-8 with a 3.78 ERA and 169 strikeouts this season. This will be Berrios’ first career start against Washington.

I think you could make a case for either side, as Sanchez has pitched well for the Nationals but he’s coming off of a start in which he allowed seven runs in five innings of work. Berrios on the other hand has allowed five or more runs in four of his last six starts and has allowed a total of 17 runs in 17 innings in his last three starts at home. Two teams who have been playing well lately with a somewhat questionable pitching matchup given their recent form, and I’ll side with the over here.