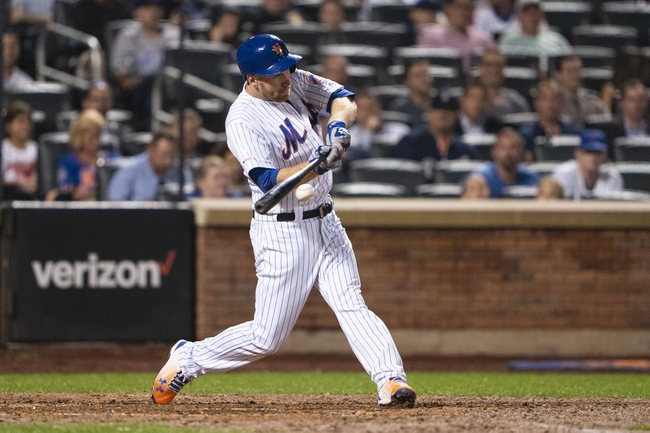 TV: SNY Stream the MLB Game of the Day all season on ESPN+. Sign up now!

The Chicago Cubs and the New York Mets meet in the finale of a three game set in MLB action from Citi Field on Thursday.

The Chicago Cubs will look to complete the sweep after taking the first two games of the series with a 10-7 win in game two on Wednesday. Kyle Schwarber went 2 for 4 with a home run, a double and three RBIs while Nick Castellanos, Addison Russell and Ian Happ each had two RBIs with Castellanos and Happ each belting a home run. Kris Bryant went 2 for 5 with a double while Victor Caratini added two hits and Kyle Hendricks and Tony Kemp each chipped in a base knock as well to finish off the Cubs’ offense as a team in the victory. Hendricks allowed six runs on eight hits while striking out three over 4.2 innings of work, not factoring in the decision. Kyle Ryan got the win in relief to improve to 4-2 on the year while Craig Kimbrel closed out the 9th for his 12th save of the season. Jon Lester will start game three and is 10-9 with a 4.49 ERA and 134 strikeouts this season. In his career, Lester is 6-1 with a 3.40 ERA and 48 strikeouts against the Mets.

The New York Mets will look to bounce back and salvage a win after dropping game two on Wednesday. Jeff McNeil went 3 for 5 with a home run, a double and two RBIs while J.D. Davis added a solo home run. Michael Conforto went 2 for 4 with a double and an RBI while Wilson Ramos, Joe Panik and Amed Rosario each contributed RBIs to cap off the Mets’ scoring as a team in the losing effort. Todd Frazier went 2 for 4 with a double to round out New York’s offense as a team in the loss. Noah Syndergaard went just three innings, allowing all ten runs, nine earned, on nine hits while striking out five, falling to 9-7 on the year as a result. Jacob DeGrom will start game three and is 8-7 with a 2.56 ERA and 207 strikeouts this season. In his career, DeGrom is 2-2 with a 3.04 ERA and 55 strikeouts against the Cubs.

Going against DeGrom is always a dicey proposition, given that he’s allowed two earned runs or less in 16 of his last 17 starts and the Mets have gotten better at winning games with DeGrom on the hill while Lester’s been very shaky lately for the Cubs. However, the Mets have dropped five in a row and are starting to lose gas while Cubs have been the better team in the first two games of the series, and Lester’s allowed just three runs in his last 11 innings on the road. Lester’s also had a lot of success against the Cubs in his career, so I’ll take a stab at the Cubs and the plus money for the sweep on Thursday.