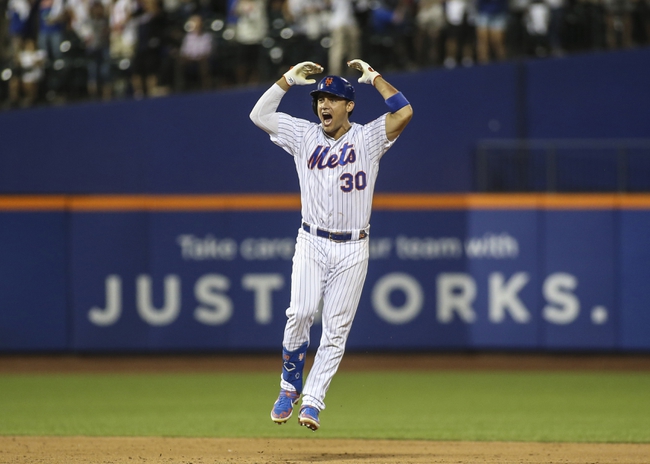 The Washington Nationals and the New York Mets meet in game two of a three game NL East division set in MLB action from Citi Field on Saturday.

The Washington Nationals will look to rebound after letting one slip away in the series opener, dropping Friday’s game by a final score of 7-6. Anthony Rendon went 2 for 5 with a home run, a triple and three RBIs while Juan Soto had a home run and two RBIs while going 3 for 5 with a double as well. Adam Eaton went 3 for 5 and Trea Turner and Matt Adams each had two hits while Victor Robles added a base hit as well to cap off Washington’s offense as a team in the defeat. Stephen Strasburg allowed three runs on four hits while striking out six over seven innings of work, not factoring in the decision. Sean Doolittle took the loss, falling to 6-4 after allowing four runs in the bottom of the 9th on six hits. Patrick Corbin will start game two and is 9-5 with a 3.43 ERA and 164 strikeouts this season. In his career, Corbin is 2-5 with a 4.58 ERA and 73 strikeouts against the Mets.

The New York Mets will look to keep the hot streak alive after winning seven straight and 14 of 15 following Friday’s victory. Todd Frazier had a home run and three RBIs while Pete Alonso had a homer and two RBIs. J.D. Davis went 2 for 4 with a solo home run and a double while Michael Conforto added an RBI as well in the victory to cap off New York’s scoring. Amed Rosario went 3 for 5 with a double while Wilson Ramos and Joe Panik each chipped in base hits as well. Marcus Stroman allowed four runs on nine hits while walking three and striking out nine, not factoring in the decision. Luis Avilan got the win to improve his record to 3-0 on the year in relief. Noah Syndergaard will start game two and is 8-5 with a 3.96 ERA and 140 strikeouts this season. In his career, Syndergaard is 4-6 with a 3.47 ERA and 85 strikeouts against Washington.

I won’t lie, I was one of the first to think that Washington would expose the Mets on Friday in the opener as I thought the winning streak was smoke and mirrors due to the below level competition on the other side. However, the Mets rallied to prove me wrong on Friday, and now get to have Syndergaard on the mound, who has allowed two runs or less in four of his last five starts, going at least seven innings in each of his last five outings. Corbin’s having a solid year, but his ERA on the road is nearly triple compared to what it is at home with a 5.32 road ERA compared to 1.78 at home this season. I just think that the Mets are for real now, and getting them with a low line for a second day in a row is too good to pass up so I’ll side with New York here.