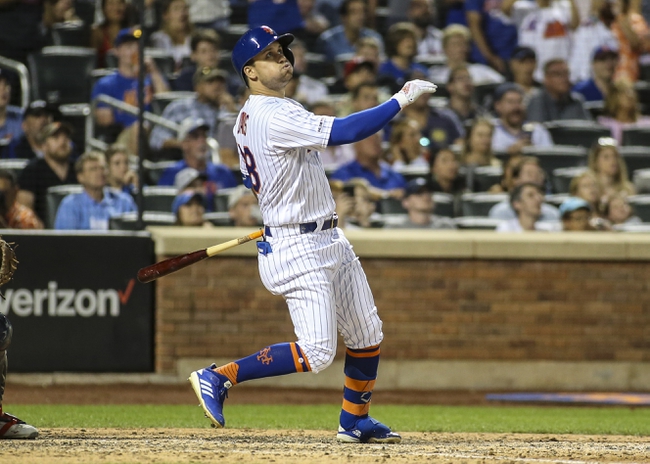 The Washington Nationals and the New York Mets meet in the finale of their three game NL East division set in MLB action from Citi Field on Sunday.

The Washington Nationals will look to avoid the sweep and salvage a win after dropping game two on Saturday by a final score of 4-3. Juan Soto accounted for all of Washington’s scoring in the loss, going 2 for 3 with a home run and three RBIs while Matt Adams went 2 for 4. Trea Turner, Anthony Rendon, Asdrubal Cabrera and Andrew Stevenson each chipped in base hitas as well in the defeat. Patrick Corbin allowed two runs on three hits while striking out eight, not factoring in the decision. Fernando Rodney took the loss, falling to 0-3 on the year in relief. Anibal Sanchez will start game three and is 7-6 with a 3.67 ERA and 96 strikeouts this season. In his career, Sanchez is 5-5 with a 4.06 ERA and 73 strikeouts against the Mets.

The New York Mets will look to keep their hot streak alive and complete the sweep after their game two win on Saturday. J.D. Davis had a home run and two RBIs while Wilson Ramos and Luis Guillorme each added a solo home run to finish off the Mets’ scoring as a team in the win. Michael Conforto and Jeff McNeil each chipped in a base hit to round out New York’s offense in the victory as the Mets had just five hits as a team. Noah Syndergaard gave up two runs on seven hits while striking out five over seven innings of work, not factoring in the decision. Seth Lugo got the win to improve to 5-2 on the year. Jacob DeGrom will start game three and is 7-7 with a 2.77 ERA and 182 strikeouts this season. In his career, DeGrom is 8-4 with a 2.44 ERA and 137 strikeouts against Washington.

The plus money is with Washington is tempting given the fact that Sanchez has gone from starting the year 0-6, to going 7-0 in his last 12 starts to get his record above .500 combined with the fact that as good as DeGrom has been, the Mets just haven’t been winning games with their ace on the mound. However, the Mets are white hot right now and have used the first two games of this series to make a statement as New York just keeps finding ways to win. The RL is hard to make a case for as both games have been decided by one run, but I expect the Mets to complete the sweep in what should be another tightly contested affair, so I’ll lay the juice with the Mets in this spot.