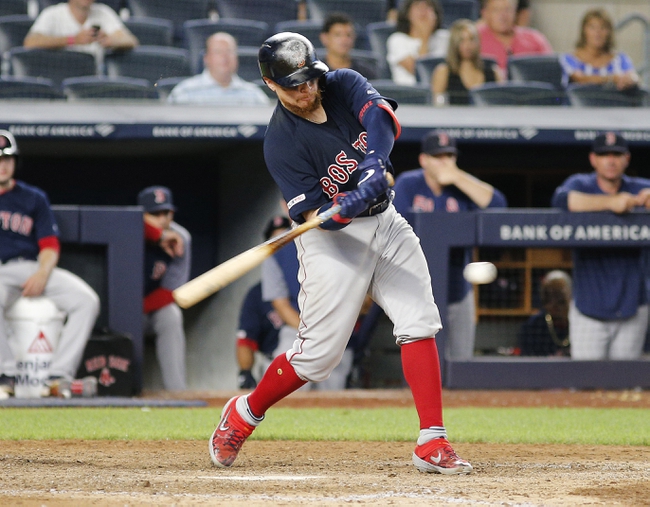 The Boston Red Sox and the New York Yankees meet in the finale of their four game AL East division set in this week’s installment of Sunday Night Baseball.

The Boston Red Sox are in dire need of a win to avoid the four game sweep and snap a seven game losing streak after dropping both legs of a doubleheader with the Yanks on Saturday, losing game one by a final count of 9-2 and game two by a 6-4 final. Game one saw Jackie Bradley JR. and Andrew Benintendi each belt a solo home run to make up Boston’s scoring in the loss as the BoSox had just five hits as a team. Game two saw a bit more production as Mookie Betts and Rafael Devers each had two RBIs with Devers hitting his 22nd homer of the season. Chris Sale took the loss on the mound in game one after allowing eight runs on nine hits in less than four full innings of work, while Matt Barnes ended up with the loss in relief in game two, falling to 3-4 on the year. David Price will start the finale and is 7-4 with a 3.86 ERA and 123 strikeouts this season. In his career, Price is 16-14 with a 4.85 ERA and 219 strikeouts against the Yankees.

The New York Yankees will look to keep the momentum going after winning the series and sweeping the doubleheader on Saturday. Game one saw DJ LeMahieu belt a pair of homers while going 3 for 5 with four RBIs while Edwin Encarnacion and Brett Gardner each had two RBIs. Game two saw Gleyber Torres go 3 for 5 with a pair of home runs, a double and two RBIs while Cameron Maybin and Mike Tauchman each had two RBIs as well with Maybin chipping in a double. Domingo German got the win to improve to 14-2 on the year after giving up two runs on five hits while striking out seven over seven innings of work in game one, while Tommy Kahnle got the win in relief in game two to improve to 3-0 while Aroldis Chapman locked up his 29th save of the season. J.A. Happ will start game four and is 8-6 with a 5.19 ERA and 89 strikeouts this season. In his career, Happ is 9-4 with a 3.00 ERA and 104 strikeouts against Boston.

Some could consider taking Boston as this is how the last four game set played out last week, with Boston taking the first three games before New York avoided the sweep with a win in the finale. However, the Red Sox just can’t get anything put together right now, while the Yankees are starting to click at just the right time. Normally I’d say these rivalry games could go either way, but right now, the Yankees are the better team and it’s not that close. I’ll side with the Yankees for the four game sweep on Sunday night.