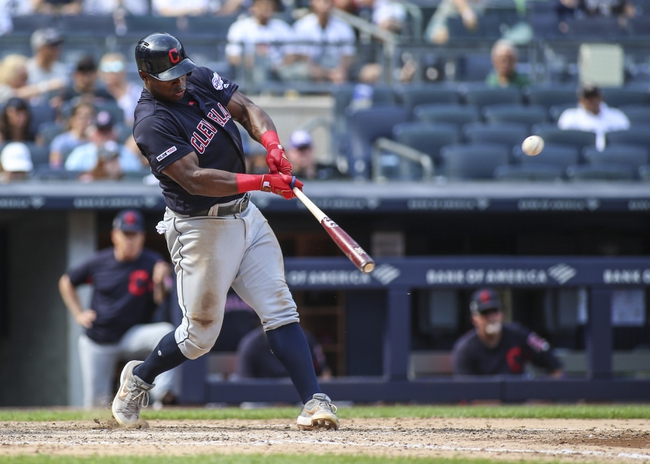 The Cleveland Indians and the New York Yankees meet in the finale of their four game set in MLB action from Yankee Stadium on Sunday.

The Cleveland Indians will look to bounce back and split the series after dropping game two on Saturday by a final score of 6-5. Carlos Santana went 3 for 4 with three RBIs while Yasiel Puig added a double and an RBI of his own. Oscar Mercado had a pair of doubles and Francisco Lindor added a two-bagger of his own while Jose Ramirez added a base hit to cap off Cleveland’s offense in defeat. Zach Plesac took the loss, falling to 6-4 on the year after allowing five runs, four earned, on six hits while striking out five over 4.2 innings of work. Mike Clevinger will start game four and is 7-2 with a 3.34 ERA and 95 strikeouts this season. In his career, Clevinger is 0-1 with a 5.65 ERA and 19 strikeouts against the Yankees.

The New York Yankees will look to win the series after back-to-back one run wins on Friday and Saturday. DJ LeMahieu and Gleyber Torres each went 2 for 4 with a home run and two RBIs with Torres adding a pair of home runs. Didi Gregorius added a solo home run of his own while Mike Ford, Mike Tauchman and Austin Romine each chipped in base hits to finish off New York’s offense in the win. James Paxton got the win to improve to 9-6 on the year after allowing four runs on six hits while walking three and striking out four over six innings of work. Aroldis Chapman closed out the 9th for his 35th save of the season. CC Sabathia will start game four and is 5-6 with a 4.78 ERA and 82 strikeouts this season. In his career, Sabathia is 4-4 with a 3.78 ERA and 75 strikeouts against Cleveland.

The Indians being favored here makes sense as Clevinger’s been on a roll, not taking a loss since the end of June, including a stint on the IL as well, which included five straight wins before a no-decision last time up. Sabathia’s also been torched lately, allowing 12 runs, 11 earned across his last two starts covering 8.1 innings. However, both of those starts came on the road where Sabathia has an ERA just under seven, and he’s had most of his success at home, going 4-1 with a 2.60 ERA this season. Clevinger’s ERA goes up three runs on the road compared to at home this season and even in a small sample size, the Yankees have shown an ability to get to Clevinger. Add in the fact that we’re getting plus money with one of the best teams in baseball at home, and I think the value is too good to pass on the Yankees here.