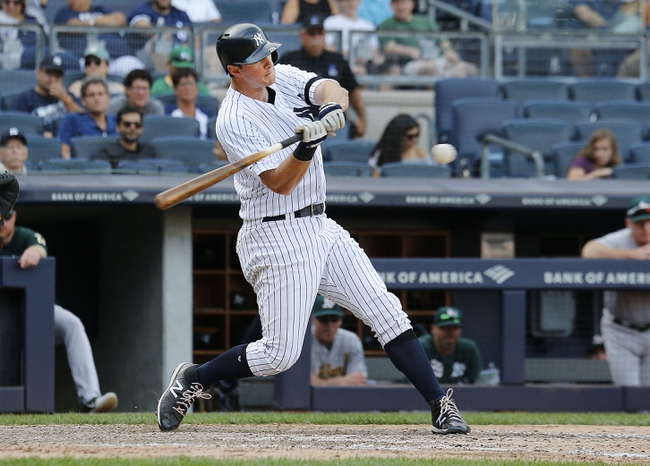 TV: TBS, YES Stream the MLB Game of the Day all season on ESPN+. Sign up now!

The Oakland A’s and the New York Yankees meet in the rubber match of their three game series in MLB action from Yankee Stadium on Sunday.

The Oakland A’s will look to bounce back after dropping game two on Saturday in extra innings by a final score of 4-3. Matt Olson went 3 for 4 with a home run, a double and two RBIs while Matt Chapman went 2 for 5 with a double and an RBI to round out Oakland’s scoring as a team in the losing effort. Robbie Grossman, Mark Canha and Seth Brown each had a base hit to finish off Oakland’s scoring as a team in the defeat. Homer Bailey allowed two runs on four hits while striking out nine over 5.2 innings of work, not factoring in the decision. Lou Trivino ended up with the loss in relief, falling to 4-6 on the year as a result. Sean Manaea will make his season debut in the finale after going 12-9 with a 3.59 ERA and 108 strikeouts last season. In his career, Manaea is 1-1 with a 4.58 ERA and 19 strikeouts against the Yankees.

The New York Yankees will look to win the series after evening the set up at one win apiece following a win in game two on Saturday. All of New York’s damage came via the long ball, as Gary Sanchez went 2 for 3 with a pair of solo homers while DJ LeMahieu and Aaron Judge each had a solo shot as well. Gleyber Torres and Mike Ford each had a base hit as the Yankees had six hits as a team in the victory. Domingo German allowed two runs on four hits while walking three and striking out five, not factoring in the decision. Cory Gearrin got the win in relief to improve to 1-2. J.A. Happ will start game three and is 11-8 with a 5.57 ERA and 112 strikeouts this season. In his career, Happ is 4-2 with a 3.96 ERA and 52 strikeouts against Oakland.

Happ has been all over the place over the last couple of months, so his inconsistency could make the plus money worth a look. However, one of my more profitable fade plays is going against a pitcher making their debut midway or this late in the season, as they haven’t had time to get into a proper rhythm compared to guys who have been playing all season. Granted, the Yankees have had to patch together lineups with a record number of players hitting the IL, but Manaea isn’t in an enviable spot in his first start of the year facing a dangerous Yankees team, and you have to question how effective Manaea will be considering that it was a shoulder injury that kept him on the shelf up until now. Either way, I think New York and the reasonable price is the play here.