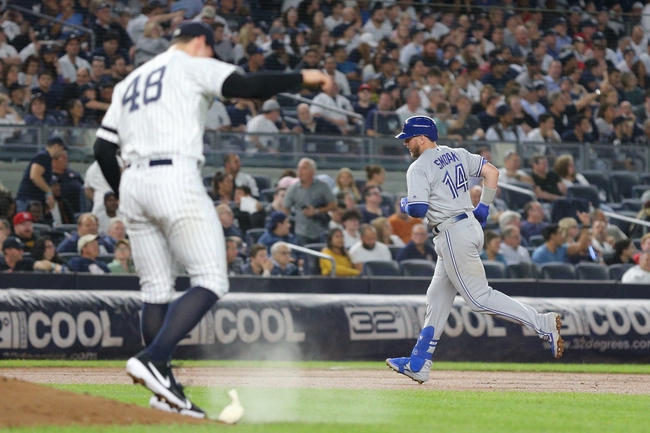 The Toronto Blue Jays look to build on their five-game winning streak. The Blue Jays have scored 23 runs in their last three games and four or more runs in nine of their last 10 games. The Toronto Blue Jays have won six straight games when scoring four or more runs. Randal Grichuk leads the Blue Jays with 130 hits and 76 RBI while Vladimir Guerrero Jr. and Brandon Drury have combined for 210 hits and 108 RBI. T.J. Zeuch gets the ball, and he is 1-0 with a 4.61 ERA and 10 strikeouts this season. This will be Zeuch’s second career game against the Yankees.

The New York Yankees need a win after splitting their last 10 games. The Yankees have scored 14 runs in their last three games and four or more runs in 10 of their last 12 games. The New York Yankees have won five of their last seven games when scoring four or more runs. DJ LeMahieu leads the Yankees with 190 hits and 97 RBI while Gleyber Torres and Gio Urshela have combined for 286 hits and 163 RBI. James Paxton gets the ball, and he is 14-6 with a 3.88 ERA and 178 strikeouts this season. Paxton is 4-3 with a 5.07 ERA and 41 strikeouts in his career against the Blue Jays.

Zeuch has allowed 14 hits and seven earned runs through his first 13.2 major league innings, and that includes five hits and two earned runs in 5.1 innings against these Yankees. Paxton has allowed eight hits and one run in his last 18.2 innings, and he has a 3.63 ERA and .216 allowed batting average at home. Paxton is pitching his best ball of the season right now, and the Yankees have a long history in the second half of bouncing back after losing the first game of the series. I'll side with the Yankees and the RL for added value.