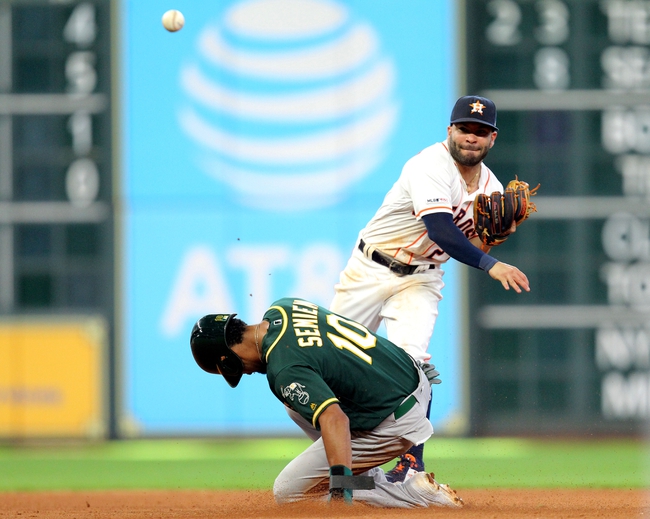 The Houston Astros could use a win after losing three of their last four games. The Astros have scored 16 runs in their last three games and four or more runs in 10 of their last 13 games. The Houston Astros have won seven of their last nine games when scoring four or more runs. Michael Brantley leads the Astros with 141 hits and 72 RBI while Yuli Gurriel and Alex Bregman have combined for 245 hits and 155 RBI. Aaron Sanchez gets the ball, and he is 5-14 with a 5.60 ERA and 111 strikeouts this season. Sanchez is 1-2 with a 5.12 ERA and 19 strikeouts in his career against the Athletics.

The Oakland Athletics look for a win after splitting their last eight games. The Athletics have scored 13 runs in their last three games and four or more runs in seven of their last 11 games. The Oakland Athletics have won six of their last seven games when scoring four or more runs. Marcus Semien leads the Athletics with 131 hits and 55 RBI while Matt Chapman and Ramon Laureano have combined for 219 hits and 125 RBI. Mike Fiers gets the ball, and he is 11-3 with a 3.30 ERA and 99 strikeouts this season. Fiers is 1-2 with a 5.29 ERA and 26 strikeouts in his career against the Astros.

Sanchez has allowed just three hits and one run in 11 innings since coming over from Toronto, but I'm not sure that's a large enough sample size to assume he's overcome what has been a rough season to say the least. Fiers has allowed 38 hits and nine earned runs in his last 46.1 innings, and he has a 2.54 ERA and .211 allowed batting average at home. Fiers has been really good pitching in Oakland since coming over in the middle of last season, and I'm not ready to get behind Sanchez just because he's been good in two starts. The Oakland Athletics at home and the plus money is looking sweet.