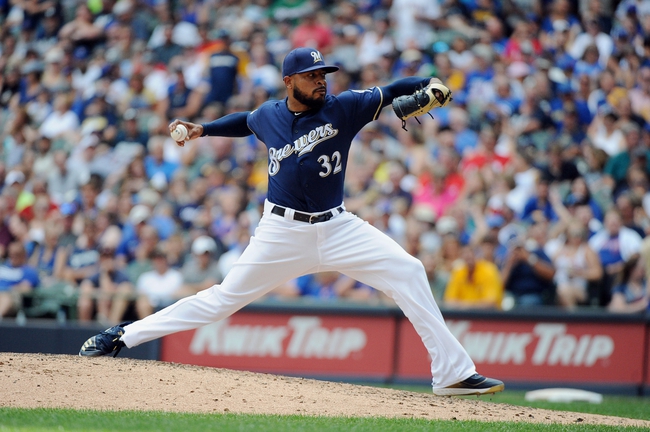 The Milwaukee Brewers and the Oakland A’s meet in the opener of a three game interleague set in MLB action from Oakland-Alameda County Coliseum on Tuesday night.

The Milwaukee Brewers will look to rebound after failing to complete the sweep of the Cubs, dropping the series finale on Sunday by a final score of 11-4. Christian Yelich and Ryan Braun each had an RBI and a double while Lorenzo Cain and Manny Pina each had an RBI to cap off Milwaukee’s scoring as a team in the losing effort. Yasmani Grandal and Jesus Aguilar each had a base hit as well in the loss for the Brew Crew. Zach Davies took the loss, falling to 8-4 on the year after allowing seven runs on four hits while walking three over five innings of work. Adrian Houser will start game one and is 4-4 with a 4.19 ERA and 54 strikeouts this season. This will be Houser’s first career start against Oakland.

The Oakland A’s will look to build some steam after salvaging a series split with Texas following a second straight one run victory, taking Sunday’s finale by a final score of 6-5. Chad Pinder had a double and two RBIs while Marcus Semien had a solo home run and Matt Olson went 2 for 4 with a double and an RBI. Khris Davis added an RBI as well to round out Oakland’s scoring as a team in the win while Mark Canha, Jurickson Profar, Robbie Grossman and Chris Herrmann each had a base hit as well in the victory. Mike Fiers allowed two runs on four hits while walking four and striking out six over six innings of work, not factoring in the decision. Blake Treinen picked up the win in relief to improve to 4-3 on the year. Chris Bassitt will start game one and is 7-5 with a 4.09 ERA and 90 strikeouts this season. This will be Bassitt’s first career start against Milwaukee.

I’d like to give Milwaukee the benefit of the doubt after how the Brewers played against the Cubs, but the issue is that Houser is 0-4 with a 7.83 ERA as a starter this season across six starts. Bassitt has gone 4-2 with a 3.51 ERA at home with a .215 batting average against this season at the O.Co Coliseum. I just think Oakland has some momentum of their own after battling back to earn a split with Texas over the weekend, and have been the easier team to trust lately, especially at home, so I’ll side with the A’s for the opening victory here.