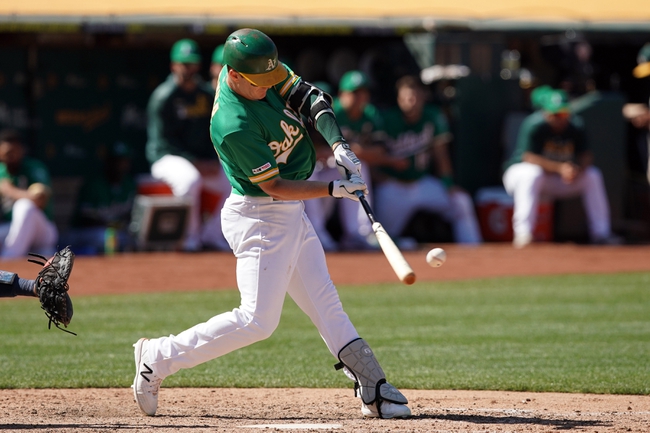 The New York Yankees and the Oakland A’s meet in game one of a three game set in MLB action from Oakland-Alameda County Coliseum on Tuesday.

The New York Yankees will look to rebound after settling for a series split with Cleveland over the weekend, dropping Sunday’s series finale by a final score of 8-4. DJ LeMahieu went 2 for 5 with a home run and three RBIs while Aaron Judge went 2 for 5 with a double and an RBI to finish off New York’s scoring as a team in the loss. Brett Gardner had a pair of doubles, while Gio Urshela, Mike Ford and Mike Tauchman each had a base hit as well in the defeat. CC Sabathia allowed four runs on four hits while walking three and striking out five over three innings of work, taking the loss to fall to 5-7 on the year as a result. Domingo German will start game one and is 16-2 with a 3.96 ERA and 124 strikeouts this season. This will be German’s second career start against Oakland.

The Oakland A’s will also be looking for a bounce back performance after failing to complete a four game sweep of Houston with a 4-1 loss in Sunday’s series finale. Marcus Semien’s solo home run was the lone run that Oakland would plate in the loss while Matt Olson went 2 for 4 with a double. Robbie Grossman, Mark Canha and Chad Pinder each contributed a base hit in the losing effort for Oakland. Brett Anderson took the loss to fall to 10-9 on the year after allowing four runs on seven hits while walking four and striking out three over five innings of work. Homer Bailey will start game one and is 10-8 with a 5.22 ERA and 108 strikeouts this season. In his career, Bailey is 2-1 with a 4.42 ERA and 13 strikeouts against the Yankees.

Oakland could be worth a look here as the A’s play very well at home and have thrust themselves right back into the wild card race, not to mention that three wins over Houston is pretty impressive. Bailey has also pitched some solid outings since being traded to Oakland, and his two clunkers came on the road. However, German has been simply dominant since coming off of the IL at the beginning of July, going 7-0 in his eight starts with a no-decision, and that no-decision saw German give up eight runs in less than four innings and the Yankees still won that game. I can’t go against New York with German on the mound in his current form, so give me the Yankees to draw first blood on Tuesday.