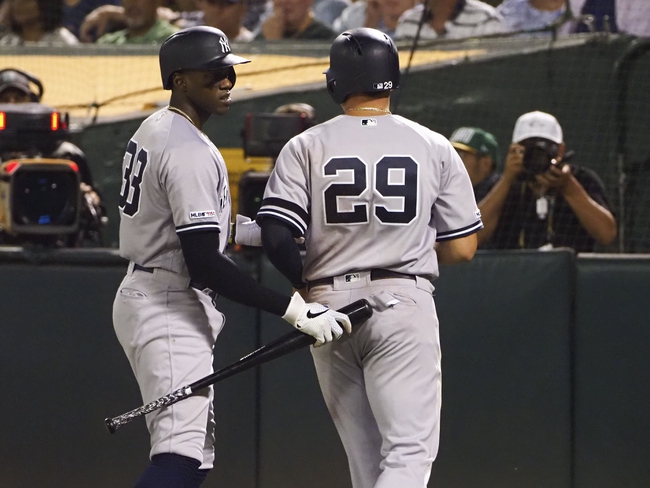 TV: NSCA, YES Stream the MLB Game of the Day all season on ESPN+. Sign up now!

The New York Yankees need a win after losing four of their last six games. The Yankees have scored 10 runs in their last three games and four or more runs in eight of their last 10 games. The New York Yankees have won 10 of their last 14 games when scoring four or more runs. DJ LeMahieu leads the Yankees with 157 hits and 86 RBI while Gleyber Torres and Gio Urshela have combined for 240 hits and 139 RBI. Masahiro Tanaka gets the ball, and he is 9-6 with a 4.56 ERA and 116 strikeouts this season. Tanaka is 3-2 with a 2.53 ERA and 37 strikeouts in his career against the Athletics.

The Oakland Athletics look to stay hot after winning seven of their last nine games. The Athletics have scored 13 runs in their last three games and four or more runs in five of their last 10 games. The Oakland Athletics have won seven straight games when scoring four or more runs. Marcus Semien leads the Athletics with 137 hits and 58 RBI while Matt Chapman and Ramon Laureano have combined for 226 hits and 128 RBI. Tanner Roark gets the ball, and he is 7-8 with a 4.01 ERA and 124 strikeouts this season. This will be Roark’s second career game against the Yankees.

Tanaka has allowed 17 hits and seven runs in his last 19.2 innings, and he has a 6.48 ERA and .280 allowed batting average on the road. Roark has allowed 16 hits and five earned runs in his 17.2 innings since coming over from Cincinnati, and he's allowing a .269 batting average on the season. Tanaka has been money in his last two starts and always been that calm pitcher for the Yankees who usually shows up when they need him most. The Yankees can't afford a sweep here, and they actually haven't lost more than three straight games since April 8-12. I'll take the Yanks here.