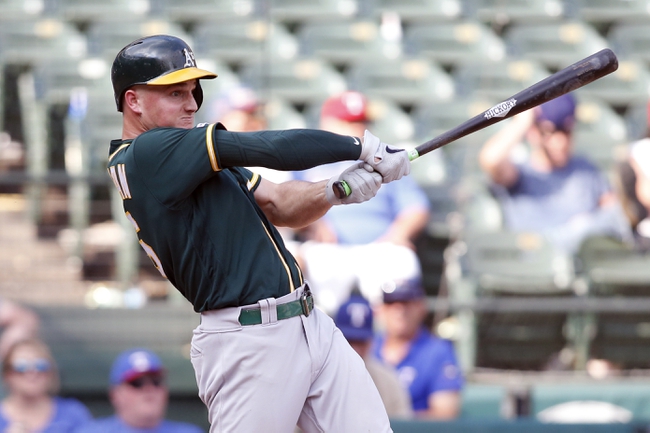 The Texas Rangers and the Oakland A’s meet in game one of a three game AL West division series in MLB action from Oakland-Alameda County Coliseum on Friday night.

The Texas Rangers will look to snap a five game losing skid after being swept in a two-game set with Houston, dropping game two on Wednesday by a final score of 3-2. Ronald Guzman had a solo home run while Willie Calhoun went 2 for 4 at the dish. Elvis Andrus, Danny Santana, Nick Solak and Jose Trevino each added a base hit to cap off the Rangers’ offense as a team in the losing effort. Kolby Allard took the loss, falling to 4-1 after allowing two runs on four hits while walking four over five innings of work. Mike Minor will start game one and is 13-9 with a 3.33 ERA and 188 strikeouts this season. In his career, Minor is 2-3 with a 4.83 ERA and 28 strikeouts against Oakland.

The Oakland A’s will look to keep the momentum going after winning eight of their last nine games following a series win over Kansas City with a 1-0 win in the series finale on Wednesday. Mark Canha went 2 for 5 with a double and an RBI while Marcus Semien also went 2 for 5 with a double and Ramon Laureano chipped in a base knock of his own as the A’s cranked out just five hits as a team in the winning effort. Homer Bailey threw seven shutout innings, giving up just three hits while striking out 11, not factoring in the decision. J.B. Wendelken got the win in relief to improve to 3-1 on the year. Mike Fiers will start game one and is 14-4 with a 4.09 ERA and 117 strikeouts this season. In his career, Fiers is 3-3 with a 6.50 ERA and 60 strikeouts against Texas.

I thought about the over given that each starter struggled against the other team in their last meeting, but Fiers was dealing with some nerve irritation and should be good to go here. Minor was fully healthy and gave up seven runs in five innings and that was at home. Oakland plays their best baseball at home, and the fact is that the A’s need this game a heck of a lot more than the Rangers do as Texas is going nowhere come October. Minor also has a 9.00 ERA against Oakland this season, so I’ll lay the juice with the A’s in this spot.