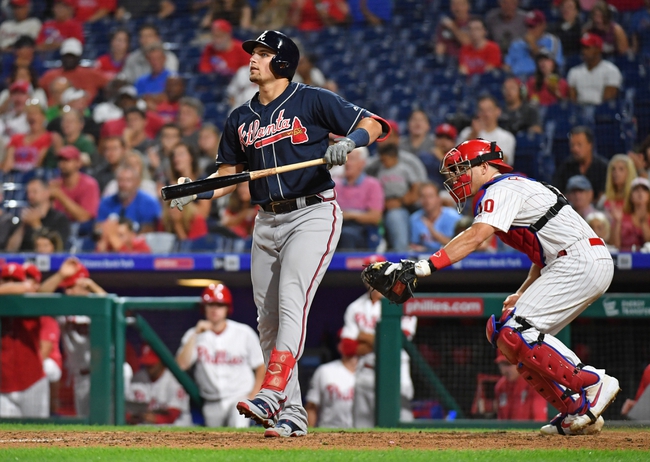 TV: ESPN, FS-Southeast Stream the MLB Game of the Day all season on ESPN+. Sign up now!

The Atlanta Braves and the Philadelphia Phillies meet in game three of their four game NL East division series in MLB action from Citizens’ Bank Park on Wednesday night.

The Atlanta Braves will look to bounce back after dropping game two on Tuesday by a final score of 6-5. Johan Camargo went 2 for 3 with a solo home run and a doble while Freddie Freeman went 3 for 4 with an RBI. Dansby Swanson and Austin Riley each had an RBI to round out Atlanta’s scoring as a team in the win while Ronald Acuna Jr. went 3 for 5 and Ozzie Albies added a base hit as well in the victory. Max Fried took the loss, falling to 16-5 on the year after allowing five runs on seven hits while striking out five over five innings of work. Dallas Keuchel will start game three and is 7-5 with a 3.47 ERA and 73 strikeouts this season. In his career, Keuchel is 1-1 with a 1.40 ERA and 7 strikeouts against Philadelphia.

The Philadelphia Phillies will look to build some steam down the stretch after evening the set up at one win apiece following their victory in game two on Tuesday. Corey Dickerson went 2 for 4 with a pair of home runs and three RBIs while J.T. Realmuto, Bryce Harper and Scott Kingery each had a solo home run as well to make up Philadelphia’s scoring as a team in the win. Rhys Hoskins and Jose Pirela each had a base hit to cap off the Phillies’ offense as a team in the victory. Jason Vargas allowed four runs, two earned, on six hits while walking and striking out three apiece over three innings, not factoring in the decision. Blake Parker got the win while Hector Neris closed things out for his 25th save of the year. Zach Eflin will start game three and is 8-11 with a 4.31 ERA and 112 strikeouts this season. In his career, Eflin is 2-2 with a 5.02 ERA and 16 strikeouts against Atlanta.

Atlanta is 5-0 in Keuchel’s last 5 starts and 40-17 in their last 57 division games while the under is 6-1 in Keuchel’s last 7 road starts. Philadelphia is 2-7 in Eflin’s last 9 starts and 2-12 in Eflin’s last 14 starts against a team with a winning record while the under is 4-1 in their last 5 games against a left-handed starter. Atlanta is 5-2 in the last 7 meetings between these two teams.

I think you could make a case for either side, especially for Philly when Keuchel’s ERA jumps from just over two at home to over five on the road while Eflin has been okay lately for Philadelphia. The Phillies are also showing some desperation like a team that has something to lose, which they are right now on the outside looking in on the playoff picture. However, Eflin has an ERA over five against Atlanta in his career, and the Braves have won each of Keuchel’s last five starts. I just am inclined to think that the Braves rebound here, so I’ll lay the juice with Atlanta on the road in this one.