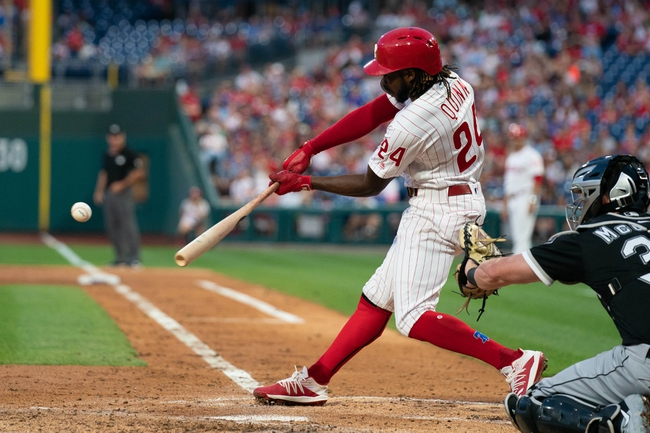 The Chicago White Sox and the Philadelphia Phillies meet in game two of a three game interleague set in MLB action from Citizens Bank Park on Saturday.

The Chicago White Sox will look to build up some momentum after emerging victorious in Friday’s opener with a 4-3 triumph in 15 innings. Jose Abreu went 2 for 6 with three RBIs while Matt Skole added an RBI of his own to finish off the White Sox scoring as a team in the win. Eloy Jimenez and Tim Anderson each had two hits with a double while Leury Garcia added a pair of his as well. Yolmer Sanchez added a triple while James McCann and Ryan Goins each had a base hit to finish off Chicago’s offense in the victory. Ivan Nova gave up two runs, one earned, on five hits while striking out four over five innings of work, not factoring in the decision. Josh Osich picked up the win in relief to improve to 1-0 on the year. Ross Detwiler will start game two and is 1-1 with a 6.35 ERA and 12 strikeouts this season. In his career, Detwiler is 3-5 with a 4.20 ERA and 37 strikeouts against Philadelphia.

The Philadelphia Phillies will look to rebound after dropping game one on Friday in a marathon finish. Roman Quinn went 3 for 6 with a solo home run while Jean Segura went 2 for 5 with an RBI of his own. Rhys Hoskins and J.T. Realmuto each had a double while Cesar Hernandez went 2 for 4 at the dish. Adam Haseley, Jason Vargas and Maikel Franco each added base hits to finish off Philadelphia’s offense as a team in the defeat. Vargas allowed two runs on five hits while striking out five over 6.1 innings of work, not factoring in the decision. Quinn played center field but also pitched two innings of relief, giving up a run, taking the loss to fall to 0-1 on the year. Aaron Nola will start game two and is 9-2 with a 3.72 ERA and 153 strikeouts this season. This will be Nola’s first career start against the White Sox.

The plus money with Chicago is tempting as the White Sox have shown that they can find ways to win, even late. Nola has also allowed four runs in back-to-back home starts, so the White Sox could be capable of putting up some runs here. However, Detwiler’s two appearances on the road this season have seem the left-hander allow 10 runs, nine earned in just 5.2 innings of work. I think Nola bounces back and I think the Phillies’ offense can do enough damage off of Detwiler to pick up a big win on Saturday so I’ll back the Phillies and to cut down some of the heavy juice I’ll back Philadelphia on the RL here.